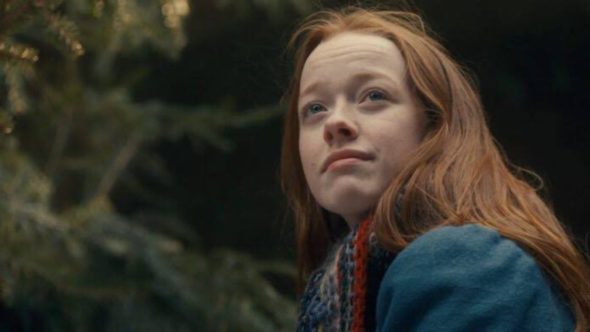 Will Anne find her happy ending? Has the Anne with an E TV show been cancelled or renewed for a fourth season on Netflix? The television vulture is watching all the latest cancellation and renewal news, so this page is the place to track the status of Anne with an E, season four. Bookmark it, or subscribe for the latest updates. Remember, the television vulture is watching your shows. Are you?

A co-production of CBC in Canada and the Netflix subscription service, this series is inspired by Lucy Maud Montgomery’s Anne of Green Gables book series. Anne with an E stars Amybeth McNulty, Geraldine James, R.H. Thomson, Corrine Koslo, Dalila Bela, Aymeric Jett Montaz, Lucas Zumann, Sebastian Lacroix, and Cole MacKenzie. The story follows Anne Shirley (McNulty), an intelligent and fanciful Canadian orphan, who is fostered on Prince Edward Island, by siblings Marilla (James) and Matthew Cuthbert (Thomson). In season three, a milestone birthday sparks a search for Anne’s origin story as she sorts out matters of the heart and starts setting a course for her future.

We already know that the show has been cancelled by Netflix and CBC in Canada so, there won’t be a fourth season, at least for now. There have been rumblings that there’s a remote chance the show could be revived but that seems unlikely. I’ll still keep my ears open and an eye out for news, and will update this page with breaking developments. Subscribe for free alerts on Anne with an E cancellation or renewal news.

What do you think? Were you hoping that the Anne with an E TV show would be renewed for a fourth season? Are you sorry that CBC and Netflix cancelled this TV series, instead?

I liked it. It added a lot to the original. Made it modern. Not sure how I felt about that in theory but I enjoyed most of the show. I’d like to have seen what happened to the Native American family as that part was heartbreaking without any hope. And to see how avinlea would change. Etc. it was just a nice change with Covid times . I would have have watched a last series. I had gotten attached to the characters. It wasn’t perfect but it was entertaining and uplifting , except for the Indian girl.

I am absolutely addicted to watching Anne with an E. Hoping a season 4 is resurrected as people watch and fall in love with the series. ❤️

One of the best shows ever. Why cancel a good show and leave the junk on. It’s a show the whole family can enjoy and learn from.