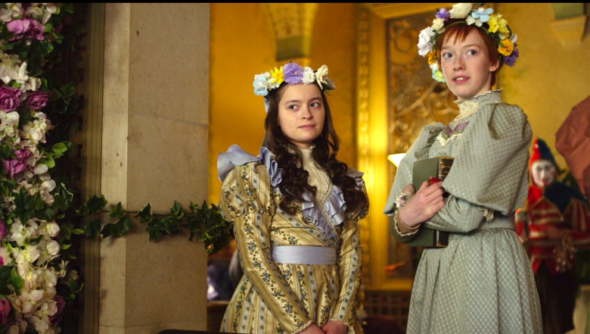 Anne with an E will be back! Recently, CBC announced they’ve renewed the TV show for a third season.

The Canadian drama, which airs on Netflix in the U.S., is based on the Anne of Green Gables novels and centers on the adventures of Anne Shirley (Amybeth McNulty), a teenager growing up on Prince Edward Island during the early 20th century. The cast also includes Geraldine James, R.H. Thomson, Dalila Bela, Lucas Jade Zumann, and Corrine Koslo.

CBC and Netflix have ordered 10 episodes of Anne with an E for season three, which is set to begin filming in early 2019.

August 15, 2018 – CBC and Netflix have renewed the award-winning ANNE WITH AN E from Northwood Entertainment for a highly anticipated third season (10 x 60). Inspired by the timeless Canadian novel Anne of Green Gables by Lucy Maud Montgomery, the third season of ANNE WITH AN Ewill continue to tell the coming-of-age story of an outsider who, against all odds and numerous challenges, fights for acceptance, for her place in the world, and for love.

The renewal comes shortly after the US and international debut of the series’ second season (10 x 60) on Netflix in July, and just ahead of the Canadian premiere of season two on CBC, the CBC TV streaming app and cbc.ca/watch on Sunday, September 23 at 7 p.m. (7:30 NT).

Executive producers Walley-Beckett (BREAKING BAD, FLESH AND BONE) and de Pencier (BEGINNERS, THANKS FOR SHARING) team up once again to re-immerse audiences in Anne’s world in Avonlea. The new season is expected to begin production this winter for launch on CBC and Netflix later in 2019.

“We are thrilled to be able to announce a third season of Anne with an E before season two premieres in Canada,” said Sally Catto, General Manager, Programming, CBC. “Anne with an E delivered a rich first season, drawing in both new and existing fans to the world of Avonlea. We have no doubt that Canadians will continue to fall in love with this beautiful and heartwarming series for seasons to come.”

“Through the storytelling of Anne with an E, the classic Canadian tale has transcended borders and found fans across our global membership,” said Cindy Holland, VP of Original Content for Netflix.  “We are excited to continue our partnership with CBC and Northwood and bring the series back for a third season.”

”Our beloved Anne will be 16 years old when we return to this season full of romantic complications, bold adventures and dramatic discoveries,” said Moira Walley-Beckett, Showrunner. “I will explore important, contemporary themes that I hope will continue to resonate with, and inspire and uplift, our audience.”

“We’re super thrilled that this series has resonated in 190 countries,” said Miranda de Pencier, Executive Producer. “I’m also very proud that we make our show in Canada with a wonderfully talented group of artists – led by the brilliant Moira Walley-Beckett. The character of Anne gives people permission to be themselves because she is so resoundingly herself. There are so many walls being built and so much fear growing in the world right now and Anne offers us a reminder that it’s okay to stay positive, be kind, and to dream, no matter how tough life gets – which is inspiration we all need.”

ANNE WITH AN E received 13 Canadian Screen Award nominations in 2018 – the most of any series nominated – and was awarded Best Drama Seriesfor Walley-Beckett and de Pencier. Walley-Beckett also won a Writer’s Guild of Canada award for writing, “I Am No Bird, And No Net Ensnares Me,” and Showrunner of the Year at the Rockie Awards as part of the 2018 Banff World Media Festival. ANNE WITH AN E was also awarded Playback’smagazine’s “Show of the Year” honour in 2017 and Art of the Title’s “Best Title Sequence” for the opening sequence of the show.

Building on the stellar success of the first two seasons, ANNE WITH AN E season 3 will continue to chart bold new territory, adding new characters and storylines while exploring themes of identity, prejudice, feminism, bullying, gender parity, diversity and empowerment through the lens of its fierce, starry-eyed, irrepressible 16-year-old protagonist. While ANNE WITH AN E will continue to honour the foundation of L. M. Montgomery’s novel, a Canadian treasure and global phenomenon, the series’ third season will creatively evolve. Ever transforming Avonlea with her unique spirit, fierce intellect and brilliant imagination, Anne and the rest of the characters will experience thrilling adventures as they explore timeless themes of identity, deceit, sexism, racism, bullying, prejudice, and empowerment.

What do you think? Are you a fan of Anne with an E? Will you watch season three?

We love Anne with E show.

I’m from Brazil and I am so thrilled that Anne will be back to show us the world through her eyes again!!! I can’t wait to see her new adventures !!

I absolutely adore every episode of this amazing show. Amybeth is beyond talented as are all the actors. The scenery is beautiful. Can not wait for season 3!

My granddaughter and I are absolutely thrilled that “Anne with an E” has been renewed for Season 3. We only wish it would be sooner, as we were both mesmerized by the characters and story line, and can’t wait to continue our journey with Anne and all the other characters. This is by far, the best family oriented show in a very long time!!!! Bravo Netflix!!!

enjoyed season one. season two no!

enjoyed season one season two not so much!!

Season 1 was decent; Season 2 much less so. I hope the third season will be worth my time.