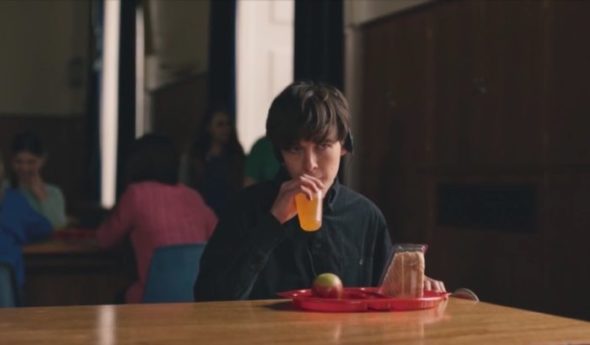 How fruitful is James and Alyssa’s quest during the first season of The End of the F***ing World TV show on Netflix? As we all know, the Nielsen ratings typically play a big role in determining whether TV shows are cancelled or renewed. Netflix and other streaming platforms, however, collect their own data. If you’ve been watching this TV series, we’d love to know how you feel about The End of the F***ing World season one episodes. We invite you to rate them for us here.

A Netflix co-production with UK Channel 4, The End of the F***ing World stars Jessica Barden, Alex Lawther, Gemma Whelan, Wunmi Mosaku, Steve Oram, Christine Bottomley, Navin Chowdhry, Jayda Mitchell, and Jack Veal. The dark British comedy-drama, based on the Charles S. Forsman comics, centers on outsiders James (Lawther) and Alyssa (Barden), as they take a road trip to get away from their families and search for Alyssa’s estranged father. At the age of 17, James has decided he is a psychopath and figures he’s ready to move past killing animals. Upon meeting him, uneasy, mercurial Alyssa wonders if she has found her soulmate. Meanwhile, James thinks he may have found his first human victim.