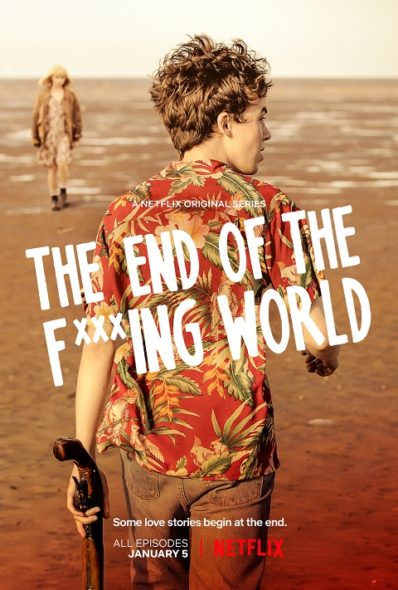 TV show description:
A dark British comedy-drama, The End of the F***ing World TV show is based on the Charles S. Forsman comics. The story centers on outsiders James (Lawther) and Alyssa (Barden), as they take a road trip to get away from their families and search for Alyssa’s father, from who she is estranged.

Soon, the teens become embroiled in a number of brutal situations. Meanwhile, police detectives Teri (Mosaku) and Eunice (Whelan), are tracking them down.

At the age of 17, James has come to the conclusion that he is a psychopath. The boy, who tends to be distant and indifferent, figures he’s ready to move past killing animals and start targeting people, instead.

For a new student, 17 year-old Alyssa is already pretty popular at school, but she cannot escape the feeling that she doesn’t fit in. Upon meeting James, this uneasy, mercurial girl wonders if she has found her soulmate. Meanwhile, he thinks he may have found his first human victim.

The chilling series in an absurd, comedic take on the journey of self-discovery.

What do you think? Do you like The End of the F***ing World TV series? Should this TV show be cancelled or renewed for another season on Netflix?

i love this show but been waiting over a year for the next season! where is it ?!