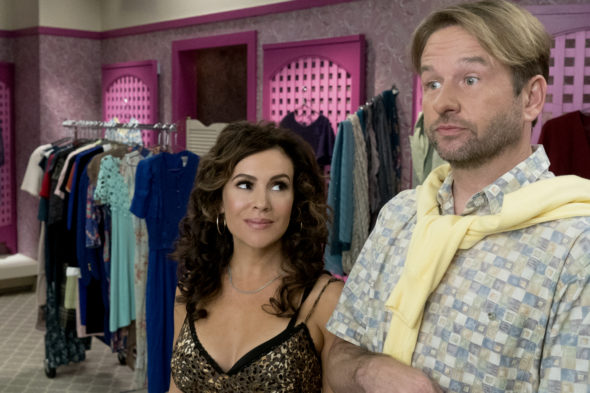 Will Patty ever be satisfied? Has the Insatiable TV show been cancelled or renewed for a second season on Netflix? The television vulture is watching all the latest TV cancellation and renewal news, so this page is the place to track the status of Insatiable, season two. Bookmark it, or subscribe for the latest updates. Remember, the television vulture is watching your shows. Are you?

A dark Netflix revenge comedy series, Insatiable stars Debby Ryan, Alyssa Milano, Erinn Westbrook, Sarah Colonna, Kimmy Shields, Irene Choi, Arden Myrin, Dallas Roberts, Christopher Gorham, and Michael Provost. The story centers on a teenager named Patty (Ryan). After having been bullied about her weight for years, suddenly, Patty is thin. Now she is hellbent on exacting retribution from everyone who has ever done her wrong.

Unless they decide to publicize viewership, it is difficult to predict whether Netflix will cancel or renew Insatiable for season two. For now, I’ll keep an eye on the trades and press releases and update this page with breaking developments. Subscribe for free Insatiable cancellation or renewal alerts.

What do you think? Are you glad that the Insatiable TV show has been renewed for season two? How would you feel if Netflix had cancelled this TV series, instead?

Renew this original and hilarious show! Love it!!!

Please please please renew this show. This is the best writing and plot twists we’ve seen in a long time. Dont bow to the PC police. Have a back bone and do the right thing. Give us a season two.

I love this show! I really hope that they will continue to make seasons. I know things will get better for Patty! They are all great actresses and actors! ♥️

I am an obese woman who wanted to dislike this show after hearing the negative reviews but I couldn’t, it was that good. I hope Netflix renews this for another season. I say, for all the haters out there (who probably didn’t even bother to watch it), give it a try and see if you don’t get sucked in. The show does not say fat bashing is alright and it’s not about telling people that if the get skinny they will be happy. It’s actually a dark comedy about how this girl thinks her life will get better once she… Read more »

I think it’s over rated how much hate this show is getting. Yes, this is a real problem, but it’s just a show. It’s not a big deal. If you don’t like it, don’t watch it. I loved the show and watched the whole thing in two days. Hope it’s renewed for season 2!

I absolutely loved Insatiable Season 1. I laughed my ars off and cried my eyes. I truly hope this show will be renewed. I need to know what happens next. You can’t leave such a giant gapping hole of unanswered questions for those who truly get what insatiable is all about. 😉

I believe the show shows a bad POV on not only the Idea of the personification of what beauty is within and outside of a person but also destroys its image of the gay and lesbian culture. Whether or not its my choice to watch I others have to see the immortality of a new type of revenge because of outside beauty and shallowness that they make seem is a good thing yet the right choices are thrown aside and turned into what seems the wrong thing to do in your head of course I hope it is cancelled.

This show was so fresh and new. The writing was great. The twists and plot complexity kept you from stopping and going to the kitchen! Yeah it’s hard on some PC stuff. But you know don’t be a snowflake be a snowball! Yes they have to go on with the show! If some Netflix viewers have a problem stream something else…there is a lot of content on this Streaming Service.

I love it!!!! Please renew! It is really funny and love the characters

I think it’s a really good series, major cliff hangers have been left, my favourites are the brick and patty love story and the latest two murders. I watched the series 2 times in three days it is amazing. The story lines are relateable and inspirational, there needs to be a season two, one of my favourite actors and one of my favourite actresses are in it, Ryan and Provost. Poor brick he needs his life to go the right way and so does patty. I highly recommend this program it is brilliant

Omg I love this show, there needs to be a season two!! I just want to know what happens to Patty and if people find out about the murder and if bob saves her again!! Okay anyways I started watching this show with my best friend( she had already watched to episode 4 so I was like I need to watch this, so the next day I had a Netflix binge day and it took me like nearly the whole day but it was worth it. Highly recommend it. The first few episodes are a little bit boring but then… Read more »

I thought it was terrific. So over the top it was wonderful. Not a plausible second in it, and that is why it’s great. Excellent writing. Excellent actors. Keep it going