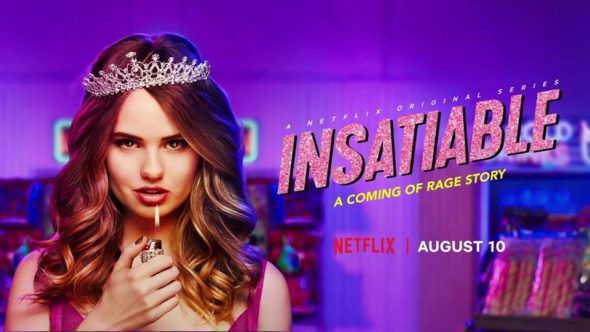 How satisfying is the first season of the Insatiable TV show on Netflix? As we all know, the Nielsen ratings typically play a big role in determining whether TV shows like Insatiable will be cancelled or renewed for season two. Netflix and other streaming platforms, however, collect their own data. If you’ve been watching this TV series, we’d love to know how you feel about the season one episodes of Insatiable below.

A dark Netflix revenge comedy, Insatiable stars Debby Ryan, Alyssa Milano, Erinn Westbrook, Sarah Colonna, Kimmy Shields, Irene Choi, Arden Myrin, Dallas Roberts, Christopher Gorham, and Michael Provost. The story centers on a teenager named Patty (Ryan). After having been bullied about her weight for years, suddenly, Patty is thin. Now she is hellbent on exacting retribution from everyone who has ever done her wrong.

What do you think? Which season one episodes of the Insatiable TV series do you rate as wonderful, terrible, or somewhere between? Should Netflix cancel or renew Insatiable for a second season? Don’t forget to vote, and share your thoughts, below.

I love bob barnard so se…xy

I absolutely LOVE Insatiable!!! If there isnt a season 2 I will be crushed. I love the show, it balances out dark humor and some serious spots. Love love love it. Netflix NEEDS to continue with it.

I love the tv show ‘insatiable’ its amazing. The best show ive seen so far. I cant wait for the next season to be released. I DONT WANT THIS SHOW TO BE CANCELLED! I vote for this show to carry on an keep up entertained.

It has been agreed that season 2 comes out this year

Awesome. Funny and respectful of diversity.

Lived it, specially ep 9!! The series and the concept are wonderful!!

I cannot say enough about how much I love this show. Not only how brilliant the writing is but also the amazing acting. One minute I’m laughing hysterically next I’m crying my eyes out because of Bob, Coralee and Bobs B’s fear of losing the one they love . I unfortunately had not heard of Dallas Roberts before Insatiable and man has he blown me away with his level of talent. With an eye roll or a simple gesture Dallas embodies his character and I am taken in sharing his emotions. I hope that Netflix will see how good Insatiable… Read more »

I love the show. Binged the entire first season over the weekend and told a few friends about it. They ended up checking it out and are also fans. I know Netflix tends to cancel stuff that doesn’t stand to win them awards, but I feel plenty of people will enjoy Insatiable and more and more will discover it. I will be so mad if it doesn’t get a second season. Plus, a second season could get even better. That happens plenty with shows. Let it find its footing and work out the kinks. I personally don’t think they need… Read more »

sorry, I meant to say “now a murderer” … But please keep the show!

PLEASEEEEE KEEP THE SHOW GOING ITS AN AWESOME SHOW! I HOPE IT COMES BACK AND KEEPS US INTERESTED!!! Not like many shows that has that crappy season and people are then really questioning if it should end! ALL THE CHARACTERS ARE GREAT! But its not cool that patty is not murderer, although they still made me laugh until the last minute! ….NOW WHERE CAN I VOTE IN FAVOR????

First season I love it I watched all in 2 days ! By far my fav! Hoping to see season 2 !

OMG! I loved to first season! It’s so honest and makes you see that your not the only one that feels alone. It’s honestly one of the best shows I have ever watched and I can’t wait to hopefully see more seasons !

Forget the haters. There are good complex storylines underneath the drama that should continue to be explored. Love Season 1, hoping so much for season two!!!