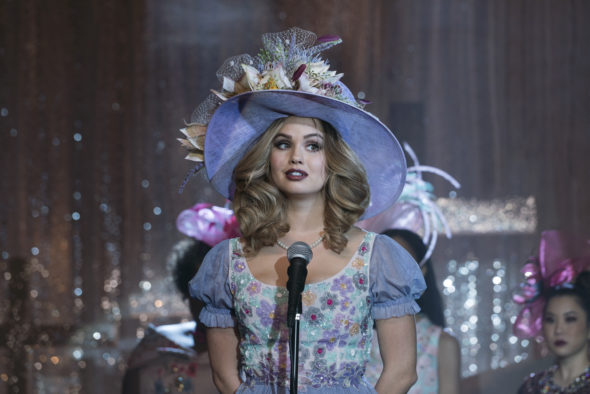 TV show description:
A dark revenge comedy from creator Lauren Gussis, the Insatiable TV show centers on a teenager named Patty (Ryan). After having been bullied about her weight for years, suddenly, Patty is thin. Now she is hellbent on exacting retribution from everyone who has ever done her wrong.

Meanwhile, disgraced lawyer Bob Armstrong (Roberts) is a man with one true passion — coaching beauty pageant contestants. After taking on Patty as his legal client, he realizes her potential and starts grooming her, with the aim of making her the number one pageant contestant in the country.

There’s only one problem. Bob and his wife, Coralee (Milano), are clueless as to the depths of Patty’s fury. Her thirst for revenge is unquenchable and she out to get anyone and everyone who has ever crossed her. Who is next? Stay tuned.

Series Finale:
Episode #22 — The Most You Can Be
The Miss American Lady pageant declares its winner as shocking truths come to light, and Patty embraces her inner self, much to Bob’s dismay.
First aired: October 11, 2019.

What do you think? Do you like the Insatiable TV series? Should this Netflix TV show have been cancelled or renewed for a third season?

Please give the closure for fans. If you don’t make a whole season, make a conclusion in movie.

I love this show. I laughed my butt off!

Definitely, should not be cancelled! I can’t wait for the 3rd season to see what happens next!

I agree. I really relate to this show. I have an eating disorder and I feel it has helped me focus on other things when I want to binge eat.

How can I get my time back? This was not a wise investment of my leisure time. I hope this show has a replacement that is not tearing somebody down to create a false foundation for vengeance and exploitation of divisiveness. Yet, look at who they cast as a hapless idiot mom of the vengeful main character. Duh, I mean really, as if you could not find a worse person. Smooth move, ex-lax. You cast a crappy actress and wonder why there is a question about the longevity for a show that shames overweight people. NETFLIX needs to say next… Read more »

I mean, I watched it, and hated it, but it did have a cliffhanger, so maybe if it is canceled, then they can do a extra episode for people who liked it to see what the cliffhanger is for.

I found it a very different series, but positively, full of twists, in short, an original series. In the second season but I would ask for more attention maybe on some specific topic more. But let’s give more hope to this program let the second season come out

Don’t cancel the show “, I gotta know what happens next. It’s just a show btw the show wasn’t trying to shame anyone.

**** so the ending went weird…im not sure wtf happened there…like whhhhhat. Ya i dunno if i liked the last episode…i loved all the other episodes…like to know where they were going with this…needs second season

Could not get through the first episode even. Bored. It was like same old, different actors. Nothing original. It’s the first Netflix show I couldnt stick with and binge watch.

I think it should not be canceled it left me with a cliffhanger. I am going to be pissed if they cancel it I need a second season already I finished it in one day. For all the hate towards it u gotta see it through a teenagers eyes. These are the type of shows we like