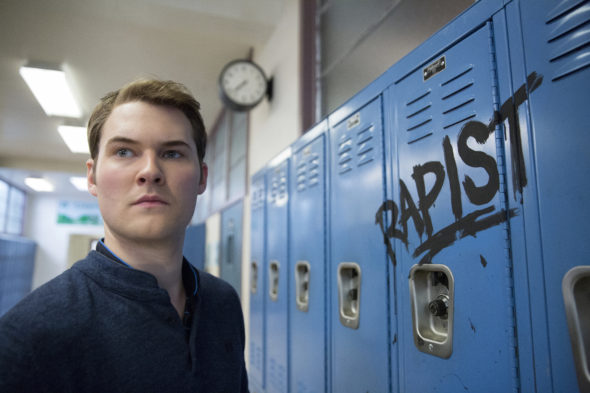 Is there either rhyme or reason to Netflix programming decisions? Has the 13 Reasons Why TV show been cancelled or renewed for a third season on Netflix? The television vulture is watching all the latest TV cancellation and renewal news, so this page is the place to track the status of 13 Reasons Why, season three. Bookmark it, or subscribe for the latest updates. Remember, the television vulture is watching your shows. Are you?

A Netflix drama based on the Jay Asher novel, 13 Reasons Why stars Dylan Minnette, Katherine Langford, Kate Walsh, Derek Luke, Brandon Flynn, Justin Prentice, Alisha Boe, Christian Navarro, Miles Heizer, Ross Butler, Devin Druid, and Amy Hargreaves. The second season picks up in the aftermath of Hannah’s (Langford) suicide. As the characters try to heal, Liberty High goes on trial, and someone is pulling out all the stops to conceal the truth.

Unless they decide to publicize viewership, it is difficult to predict whether Netflix will cancel or renew 13 Reasons Why for season three. For now, I’ll keep an eye on the trades and press releases and update this page with breaking developments. Subscribe for free 13 Reasons Why cancellation or renewal alerts.

6/6/2018 Status Update: 13 Reasons Why is renewed for season three on Netflix. Details here.

What do you think? Do you hope the 13 Reasons Why TV show will be renewed for season three? How would you feel if Netflix cancelled this TV series, instead?

I would love to see this show continue… A lot can still be recognized and written if you think about it…season 2 there wasn’t really an end, I don’t think so. This show is well made and can go a long way if given the chance. It may even address a lot of issues within teenagers and what they deal with in school to open up parents eyes and maybe help their kids come out more to their parents with their feelings.

Season 3 is a must! Its a movie binger type of series and is done quite well. I’m looking forward to the rollout of season 2 as I just finished binge watching season one and thought it was awesome.