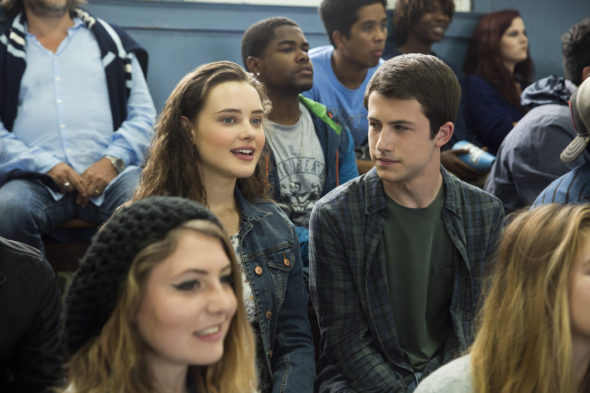 Are you happy about the 13 Reasons Why renewal? Deadline reports Netflix boss Reed Hastings is defending the streaming service’s decision to renew the controversial TV show for a third season.

Recently, Netflix boss Reed Hastings said he supports the company’s decision to renew 13 Reasons Why for a third season despite concerns from groups like the Parents Television Council about the series’ graphic depictions of self-harm and sexual violence:

13 Reasons Why has been enormously popular and successful. It’s engaging content. It is controversial. But nobody has to watch it.”

[Hastings] is ostensibly proclaiming that financial gain for Netflix trumps the real-life consequences of his programming. Is that what Mr. Hastings and Netflix stand for in today’s world of #MeToo, whereby women who are sexually harassed in the workplace are told ‘nobody has to work here?’ Is that his opinion on marketing tobacco to children, or for other dangerous products that enter the stream of commerce and cause injury or death, that ‘nobody needs to buy it?’”

What do you think? Do you watch 13 Reasons Why? Will you watch season three?

Yes I like this movie and would like to watch all episodes on netflix :). Please continue with new episodes.

I have to admit that I don’t understand Reed’s comment. 13 Reasons has BEEN the embodiment of social commentary since its inception. In fact its strongest suit is the way local commentary is delivered in an artistic fashion. 13 Reasons is an important show: No current show does more to inform its viewer about certain issues and available resources.
No one having suicidal feelings need feel alone.

Usually, people in the mental health field realize how important the knowledge of others feeling the the same pain is. It’s been laypeople who have protested this show.

Nobody needs to defend anything.

It doesn’t matter what a small minority think.

It’s a TV show, nothing more or less and it’s way overdue for network execs to grow back their backbones and stop kowtowing to the PC brigade.

This is a good show, it addresses topics that are relevant to teens today when so many want to avoid or pretend the they don’t exist. If it takes a show to get people to realize these hard issues are reality for today’s teens than you should thank the show for opening the door to discussions and opening people’s eyes. Not only is the show 13 Reasons Why bringing up difficult topics but it is also showing how today’s kids might deal with these issues and what happens when parents are absent from daily life. If you can watch the… Read more »

Folks forget that the vast majority of parents do not communicate with their children so, therefore, kids learn the hard way about life. When someone such as Netflix comes in to help start a conversation about what these parents have never cared to know, and have kept their heads in the sand about, these otherwise invisible parents come out of the blue and cry foul. I think not! If Netflix wants to use their money and resources to teach your kids because you can’t or won’t, by all means they have my blessing. I’m tired of doing your job for… Read more »

This is a great show and really should have ended (with a bit more of a wrap-up) with Season 1, but I’m glad there was a season 2 however! The show is over, but I guess the network wants to squeeze a few more bucks out of it. I suppose the viewers should be grateful, normally if a show is really good it gets cancelled. I’m sure it will do well in the ratings and top-up the Netflix coffers, but I really think it’s a case of flogging a dead horse. Showtime did the same thing with “Homeland”, that should… Read more »