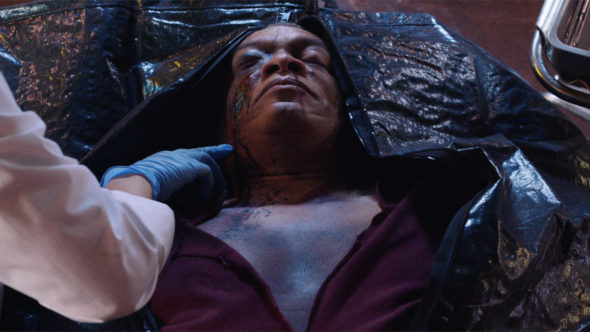 We have some bad, but not unexpected, news. Syfy has cancelled its Superstition TV show after just one season. The cancellation had been expected since December of last year, when Syfy moved the drama series out of its primetime slot to Thursdays at 11:00pm. Robinne Lee, who starred as Bea Hastings, confirmed the Superstition cancellation on her verified Twitter account. Check it out, below.

The supernatural series centers on the Hastings family of La Rochelle, Georgia. They happen to own the only funeral home and cemetery in town. Because of unexplained deaths due to demonic activity, the family also offers “afterlife care.” In addition to their arsenal of esoteric weapons, the Hastings employ extraordinary strength, alchemy, and their expertise in ancient lore and the occult, to keep the “Infernal problem” at bay, in this “landing patch” of a town.


Thank you so much! We really enjoyed making it.

Superstition: A Look at the Ratings

What do you think? Did you watch the first season of the Superstition TV series? If it were up to you, would Syfy have cancelled or renewed it for season two?

Should let there be series 2 I loved first series so sed many others and they’ve kept on shows that are stupid in storylines and rubbish characters I love superstition we need now.so bea can come back please bring her back

Really enjoyed season 1, it’s very disappointing that there will be no season 2.

this show should have at least played another season. I don’t think it was given a fair chance I know quite a few people who are diffinatly very interested in the series. Please give it more more thought. The T.V. show was great. We all loved it.

I agree I really enjoyed also and will like to see a season 2. I really wish that people stop canceling shows with only 1 season or 2 it drives the fans crazy.

Damn good show…
Lots of good faction woven in the script…
Keys of Solomon…
Actual burial rites of the…
People of the Nile…
The real Knights of the Temple Mount…
Yeah I knew it would not last long!
Anything MVP does is factual and
Outstanding!!!
I wish Him and his Family Well
&
Thank For such a Damn good Show!

It is the best tv show l have ever seen

I don’t think SyFy gave Superstition a real CHANCE. I definitely loved the show. I believe if syfy gave the show another chance and changed the time to Saturday’s at 8 or 9 pm SyFy would get better ratings. There is really nothing to watch except on the animal planet channel. PLEASE eeeeeeeeeeeee bring it back!!!!!

It’s no longer worth paying for TV because y’all cancel all the great shows leaving shows bot fit for a slug to watch. I’m disabled, bed ridden and since yall u us rest of network canceled most Every show I watched and loved, I no longer even bother to even check out anything new, what’s the point, you all are just going to cancel them just as we are drawn into it. One of my children let me use their phone, so now I just play games and sleep. Before long others will feel as I do if they dont… Read more »

Why do they always cancel the good shows?

Tell me about it… uuurrggghhhhhhh