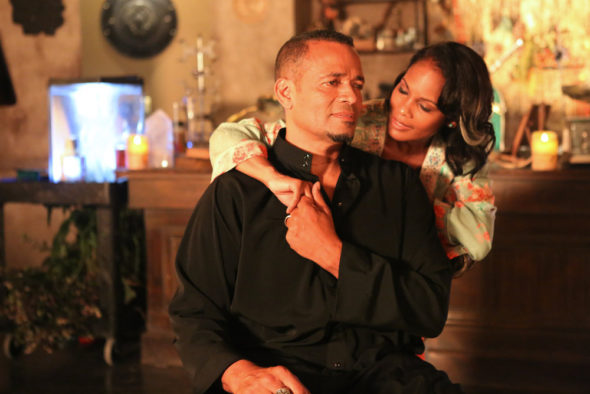 TV show description:
A Syfy horror drama, the Superstition TV show centers on the Hastings family of La Rochelle, Georgia. They include Calvin (James), Bea (Lee), May (McKinney), and Isaac (Van Peebles). The Hastings happen to own the only funeral home and cemetery in town.

Since La Rochelle is a dark and curious place, the Hastings’ duties extend beyond the responsibilities people typically associate with mortuaries and graveyards. Haunted houses, unusual townies, and a layered past all contribute to the town’s reputation.

On top of providing funerary services for clients of all faiths, the family offers “afterlife care” in the event of unexplained deaths due to demonic activity. In addition to their arsenal of esoteric weapons, the Hastings employ extraordinary strength, alchemy, and their expertise in ancient lore and the occult, to keep evil at bay.

There’s something sinister at work in La Rochelle — some supernatural, secret scoundrel pulling strings behind the scenes. Why else is this hamlet a “landing patch,” for any number of frightful phenomena? Can Calvin and his family put an end to the “Infernal problem” plaguing this town? Stay tuned.

Series Finale:
Episode #12, “Resurrection”
Calvin has decided to drop in at May’s, presumably just to talk. But things soon start to heat up, and Calvin forces himself on May. She manages to shove him off, and Calvin leaves. Or should we say… The Dredge leaves. That’s right. Inside this Calvin is that infuriating Infernal, back to his old tricks.

Garvey is concerned for her mother, and her father, but doesn’t know how to help, and she voices her concerns to Russ. He’s excited to be part of the supernatural crime-busting outfit, and has even programmed a database that collects information on anything out of the ordinary happening in town.

Meanwhile at the Hastings Funeral Home, May tells Tilly about her strange encounter with Calvin, and Tilly freaks out. Rightly so. They think that Calvin might be experiencing symptoms of PTSD from his time in Afghanistan. It’s certainly possible. But where is Calvin? Oh, he’s busy stabbing Mayor Bickley in his office.

May has come back to the Hastings crematorium with the body of an infernal, and Calvin intercepts her. He’s definitely in better spirits now, and glad to see May. But he has no recollection of hurting her, which leads everyone to believe that Calvin has gone to a dark place. Or is it really Calvin? If so, he’s been busy. In his spare time, he crafted a very powerful rune for his father — something called a nuke rune. It’s his goodbye present to him. In fact, Calvin is saying his sort of goodbyes to everyone close to him. He’s going far, far away. Where?

Into the woods where no one can find him. He pulls a gun on himself… and pulls the trigger. Oh. Damn. Meanwhile, a still-living but very angry Bickley summons Isaac to his office. He was under the impression they had a deal they weren’t going to attack each other, and is pissed off. Isaac never ordered Calvin to stab him. So what’s going on?

Dredge-Calvin overtook regular Calvin and so he wasn’t able to pull the trigger. So later, Dredge-Calvin meets Isaac in the alchemy room, where they have a father-son chat. Things go south pretty quickly when Calvin, aka the Dredge, knocks Isaac down, and starts to disembowel him. Sort of Freudian…? Before he leaves, the Dredge as Calvin opens the door to the freezer, and takes a dead Infernal from it for the road.

Then Dredge-Calvin gives Garvey a call, and tells her come to the woods. And he also tells her that she’s not to trust anyone. Sound advice, if it were coming from someone besides The Dredge. The whole family, minus Garvey and Russ, convene in the Alchemy room to put the pieces together. The Dredge must have used Calvin’s body to get blood from everyone, and use it to reanimate an Infernal (the one he took from the chiller). All he needs is blood, a body… and a virgin. That’d be Garvey.

Speaking of Garvey, Russ is driving her to the woods right now! While she enters the woods, none other than the infernal Skinny Jenkins who was brought back to life by the Dredge’s sorcery abducts Russ.

In the forest, the Dredge is all decked out in Tilly’s black robe (which he stole) and back in his old body again. He’s got Garvey unconscious – the easier to drain her blood – and Russ tied up. Russ manages to reach for his phone, and send a location to the Hastings. But that seems to be playing into The Dredge’s plan: he wants everyone together to watch his reincarnation. During it, The Dredge reanimates his old body, and passes from Calvin’s body.

Then The Dredge removes from Calvin’s hand the Ring of Solomon, which drains Calvin of his power. The whole process is complex, and also a bit unsuccessful. The Hastings come upon The Dredge in the woods, and he’s not looking too good. Bea runs over to Calvin to revive him. They’re going to need him to defeat The Dredge.

Once awake, Garvey gives Russ a kiss for good luck. She manages to harness the power of a nearby meridian (a pocket of earth’s energy) in order to knock him out. It’s for his own safety. The Hastings use every trick in their book to take down The Dredge. Vajras, runes, manpower, womanpower, sheer power. But nothing’s working.

Then Calvin gets trapped inside a magic bubble that separates him from the rest of the family. The Dredge gets hold of Isaac’s Excalibur, the Damascus Sword, and fixes to use it as his finishing move. Just as The Dredge is about to bring down the sword on Calvin, the blade is knocked from his hand by a blast of energy. Where did it come from? It’s Tilly and her witch friends! They’re decked out in hoods, and ready to kick Dredge ass. They get to work summoning the power of Mother Earth and…it works!

But while the Wiccans were fighting with The Dredge, Calvin found the Ring of Solomon broken and inert, and Isaac found his wife… impaled by the Damascus Sword. The magic the wiccans worked was enough to banish the Dredge and his army of infernals (at least temporarily), but not in time. Bea’s wound appears to be fatal, and Isaac is incredulous. (Courtesy of Syfy)
First aired: TBD

What do you think? Did you enjoy the Superstition TV series? Should this Syfy TV show have been cancelled or renewed for another season?

Its 2022 an I still think about the show I was a very good show I just knew it was going to be another serious boy was I wrong. I have my thoughts of why they got rid of it. Just like NY undercover

Don’t take this away.

And here another one you are taking away just shut the whole tv down you take every thing away from us . I’m so mad about this all i ask is why?

I loved this show. Please don’t cancel the show because it is really a show that keeps you watching, it grabs your attention and keeps you on the edge of your seat. I really hope if syfi doesn’t continue with this series they will regret the ratings it will bring them. Please don’t let the show die this way there is so much potential. I personally hope if sifi drops this then someone needs to pick it up seriously.

I am sooooo disappointed to find that the show has been cancelled 🙁 I thought it was interesting and it’s one of the few shows that I watched in real time (instead of just DVR’ing it and watching whenever). I hope it finds another home.

I loved the show and I wish it hadn’t been cancelled.

I think it’s a shame they cancelled a good show like Superstition. I was really looking forward to seeing where the storyline was going.

Incredible show…loved it! Wish that they could renew it for another season.

Love this show. It brought a new look to the supernatural world. Please bring it back

Loved this show!! Please bring it back!