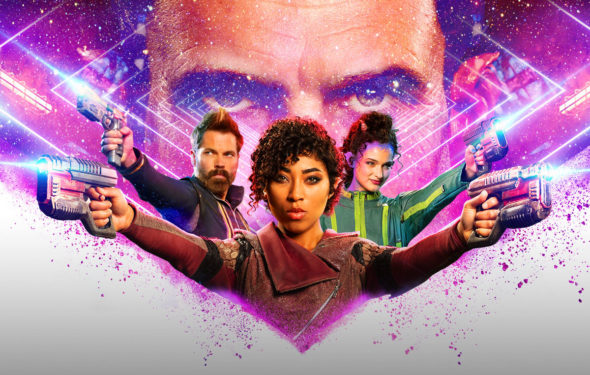 TV show description:
A sci-fi Western series, Vagrant Queen is based on the Vault comic books by Magdalene Visaggio and Jason Smith.

The show revolves around Elida (Rae), a former queen turned scavenger who’s been on the run since her throne was stolen as a child. She’s always one step ahead of the Republic government who’s out to extinguish her bloodline.

Isaac (Rozon) is a charming but deadbeat Canadian who was accidentally catapulted to this galaxy five years ago. He’s been living as a scavenger, desperate to make enough cash to buy his way home. An old friend of Elida’s, Isaac shows up claiming that her mother, Xevelyn, is still alive.

The two head off with their new ally, a skilled mechanic and pilot named Amae (McGregor), to stage a rescue. This takes Elida back into the perilous heart of her former kingdom and up against a deadly foe from her childhood — ruthless and power-hungry Commander Lazaro (du Toit).

What do you think? Do you like the Vagrant Queen TV show? Do you think it should have been cancelled or renewed for a second season?

While I can appreciate that Tim Rozon is a comic book geek, I think that the role of Isaac just wasn’t an especially good role for him.

Vagrant Queen should NOT be cancelled !!! It is visually UNIQUE with EXCELLENT CHARACTERS and WONDERFUL MUSIC !!!

Absolutely love love love this show. I’ve been watching since the first episode. Threw me off a bit when they changed the air date because there was a couple weeks in between episodes but still have yet to miss one. Record it to my dvr just in case I want to rewatch an episode, which typically I do. I hope it doesnt get cancelled with so much story left to be told.

Anyone know a date for syfy England please Thanks

whoa – not a good start for me. tacky writing, sloooooooowwww dialogue (lots of pauses waiting for… dramatic effect?)