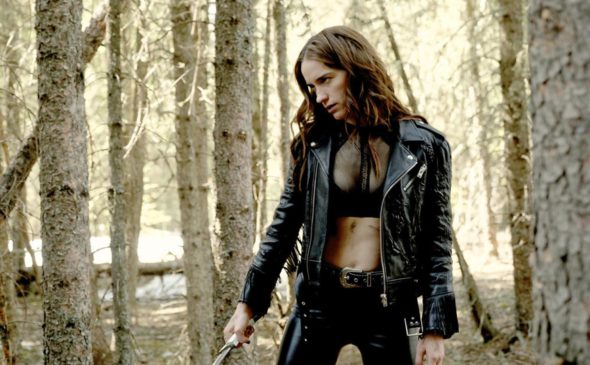 The wait is nearly over for fans of the Wynonna Earp TV show. Syfy and Canada’s CTV Sci-Fi Channel have announced that season four of the Western sci-fi drama is set to launch on Sunday, July 26th, at 10:00 PM.

The series was renewed for a fourth season back in July 2018 but production was put on hold in February 2019 due to IDW Entertainment “experiencing financial difficulties, running a deficit, and cannot proceed.” At that time, it was reported that the series had already been renewed for a fifth season but it’s unclear if, given the financial issues, that will come to pass.

In July 2019, it was announced that production would resume. It did but filming was suspended in March 2020 due to the coronavirus pandemic.

#WynonnaEarp news: we are temporarily shutting down production on season 4. We are sure this is merely a blip, but we must follow Alberta health protocols. The safety of our cast & crew is of paramount importance to us. Thank you to @SYFY & @CTVSciFi for their unwavering support!

Here’s the fourth season premiere information from Syfy, as well as a video teaser:

Due to the enforced production break caused by the COVID-19 pandemic, the first 6 episodes will culminate in a mid-season finale airing on Sunday, August 30 at 10/9c on SYFY. Production on the final 6 episodes of the fourth season is slated to resume later this summer in Calgary.

In Season 4, the infamous Earp Curse is broken, and witty and wild demon hunter Wynonna Earp would love to be celebrating with cold whiskey and hot donuts. Too bad she has to rescue everyone she loves, save the town of Purgatory, and take on her most diabolical, Earp-hating enemy yet — all without her trustworthy gun, Peacemaker. And that’s just Monday…

Additionally, WYNONNA EARP will join the panel lineup for Comic-Con@Home, the virtual program for San Diego Comic-Con that runs from July 23-26. The panel is expected to include special appearances by Emily Andras, Melanie Scrofano, Tim Rozon, Dominique Provost-Chalkley, Katherine Barrell and Varun Saranga.

What do you think? Do you like the Wynonna Earp TV series? Will you be watching season four on Syfy? Do you think that season five will eventually be made?

It took a little time to get into this series, but, it is funny, raw,

I have been impatiently waiting for season 4. So looking forward to July 26th.

Renew if loving you is wrong good show