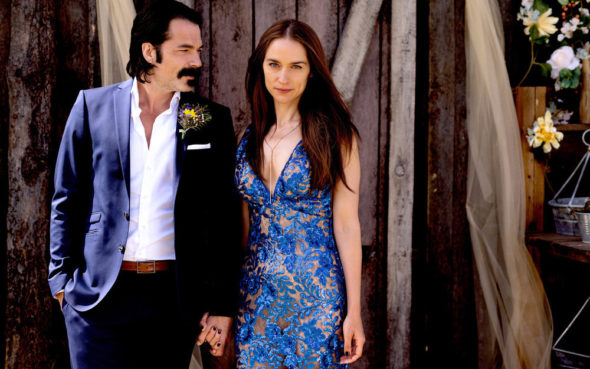 Wynonna Earp wrapped its fourth and final season on Syfy on Friday night, and the story ended on a happy note for the characters.

Melanie Scrofano, Tim Rozon, and Dominique Provost-Chalkley star in the series which follows the great-great-granddaughter of Wyatt Earp as she takes on demons with a little help.

Spoilers ahead if you missed the finale.

The Syfy series ended with a wedding for one couple and “three little words” for the other. During the finale, Waverly Earp married her girlfriend, and Wynonna and Doc Holliday finally said “I love you”. Had the show been renewed for a fifth season,  the wedding could have been delayed until next season, but the future of the series was up in the air when the episodes were being filmed. Syfy subsequently cancelled the series, but a search is ongoing to find a new home.

Series creator Emily Andras said the following about the ending of Wynonna Earp, according to The Los Angeles Times:

“I will be honest, I think if I had known for sure that we were going to have another season, I might have risked delaying the wedding. I might have drawn out the suspense, drawn out the drama. But in my heart, I just felt like we couldn’t risk it for the audience. And weirdly, I hoped it was a gift for the cast — both the wedding and the Doc-Wynonna story.

I wanted to leave these characters in a place where they saw that happiness and joy is worth fighting for. Even if it’s just a moment in time. That’s worth it. It doesn’t have to be perfect. There’s no guarantee it will last. But it is still so worth it to fight for your moment, to fight for what you want, to fight for someone who gets you.

I don’t want to oversell it, but I feel like we need to reward the people who have stayed with us with something that is a moment of love and joy after such a hard fight both on and off-screen.”

What do you think? Were you happy with the series finale of Wynonna Earp? Would you like to see a fifth season if the show were picked up by another channel or service?

Just very tired and annoyed of the constant cancellations of top-notch television shows, which stupid crap like “Dancing With The Stars” remains. It just goes to show the level of intelligence in this world.

Another great show bites the dust…meanwhile there’s still a bunch of unwatchable crap on American TV….I am excited to see that Tim Rozon has a new show (The Surrealtor) coming up.

My husband and I have watched from the very beginning to the very end! We were both sorry to see it go but so happy that the ending was perfect for everyone! We will miss seeing you each week, but thank you for all that you gave to us!

Both my hubby and I, both love Wynonna Earp. I truly hope that a season 5 and more is made, as this is such a new and refreshing story, with amazing actors that really draw you into their characters. If nothing more is worked out, thank you to all for the beautiful wedding and ending. It’s nice to get the warm and fuzzies for a change in our lives right now.

Yes, Wynonna Earp needs a season 5 and beyond. It is the best show of all time… it is real, it’s about loyalty, love, friendship, and family. We don’t see this kind of stuff these days. What’s even better, the actors that play the roles are kind and authentic. Ahem….Dominique Provost-Chalkley , you’re going to change the world girlfriend! I’m so proud of you. And Queen Andreas is the best show runner. She truly cares about social change and making a huge difference in the world.

Wynonna Earp is hands down the BEST tv show of all times. No show is more devoted to the story and the fans. The cast/crew and the fans have an unconventional love for this show. The season 4, episode 12 was beautifully made, it was the first time I saw a q ueer weeding in TV, and it warmth my heart in ways that I cannot described. But also there are still the a lot of story to tell. We need season 5 and beyond for our beloved show.

I feel we need a season 5 but don’t think we will get it right away. If not perhaps a movie? I loved the ending of in fact it is the ending. I will continue to look for shows written and produced by Emily Andres. Love her for making this happen.

Season 5 and beyond and a movie 10 years down the road.