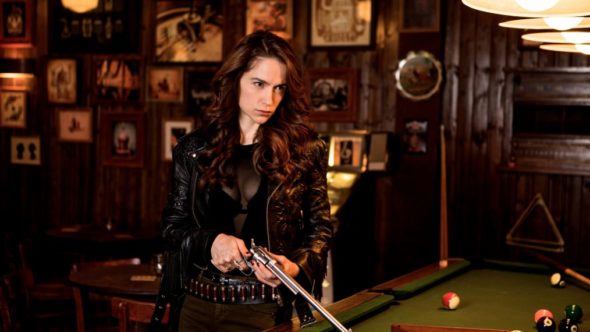 Wynonna and her legendary ancestor’s famous gun still have a lot of work to do. Syfy has announced that they’ve renewed their Wynonna Earp TV show for a fourth season of 10 episodes.

Season three of Wynonna Earp kicked off last Monday night at 11:00 PM and it drew a 0.09 rating in the 18-49 demographic with 371,000 viewers. Compared to the second season’s opener, that was even in the demo and down by about 20% in viewership. The cable channel reran the third season premiere this past Friday night and will continue to air the rest of the season in the Fridays in the 9:00 PM timeslot, leading into the fourth season of Killjoys.

Some great news for all you Earpers out there. Wynonna Earp will be back for a fourth season.

The news dropped Saturday at the SYFY show’s panel at San Diego Comic-Con, which was met with roaring applause from attendees. This has become something of a tradition for the horror/western, which has revealed its season renewals at Comic-Con panels the last few years.

“It’s such a testament to our fans that we’ve just premiered barely and we have a Season 4,” Melanie Scrofano, who plays the show’s titular heroine, told the crowd.

The show, which focuses on Wyatt Earp’s great-great-granddaughter contending with the Earp family curse, has had an active fanbase that’s helped drive up word-of-mouth viewership.

Among the things we can expect in season three this year, Dominique Provost-Chalkley, who plays Wynonna’s sister, Waverly, addressed that big secret being kept from her.

“Waverly’s year is broken in that moment, said Provost-Chalkley. “Her relationship with her mother was particularly special since she didn’t have one with her father, but one of Waverly’s best traits is the ability to forgive. And she’ll do everything in her power to make sure she understands why Wynnona would keep that from her.”

What was on everyone’s mind, of course, was how worried do our heroes have to be about Cootie Bulshar. Varun Saranga, who plays Jeremy, said that “the stakes this season are higher than ever.”

“Who knows the maze better than the maze maker?” Scrofano added.

Wynonna Earp will return for 10 new episodes sometime in 2019.

What do you think? Do you like the Wynonna Earp TV show? Do you think that this low-rated series should have been renewed for a fourth season?

I love this show, please don’t cancel it. A great cast & love that it’s some what about old history, with a lot of twist. Please for going forward , with wyonna Earp season4,5 & more!! Thank you lots of love Traci ❤️

I love Wynonna Earp! It’s such a fun show with a great cast. I’m so glad it’s gotten a season 4 renewal.

Yes! Yet to watch season 3 (as I watch on Netflix) but really enjoy this show! Witty and interesting, unique characters and plot! Between this and iZombie television is actually entertaining again! Glad to see it’s appreciated on SyFy (the CW is actually ending iZombie this season to the horror of so many! Pick that show up and SyFy becomes the only network worth watching!) keep it up!

Great show I grew up with westerns all though with horses not cars. Having said that times have changed, the show is fun to watch I am a fan it has all the best ingredients for entertainment drama, comedy, horror and romance. What more can you ask for keep it coming.

Absolutely love this show. With more marketing, it could gain even more fans. So happy it is renewed!

Very happy to see that SYFY has renewed WYNONNA EARP for a 4th season. Just so they don’t pull a fast one and and cancel it further into the season.