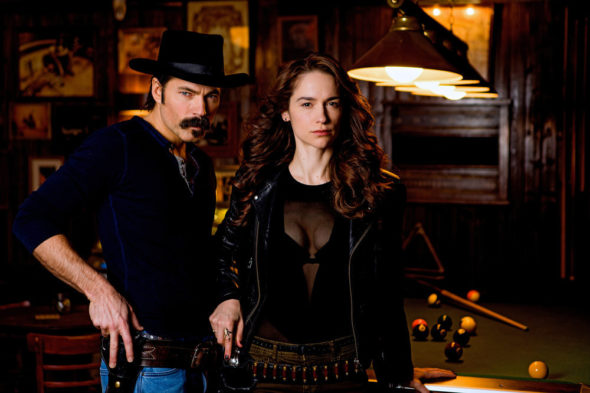 Does the Earp curse persist? Has the Wynonna Earp TV show been cancelled or renewed for a fourth season on Syfy? The television vulture is watching all the latest cancellation and renewal news, so this page is the place to track the status of Wynonna Earp, season four. Bookmark it, or subscribe for the latest updates. Remember, the television vulture is watching your shows. Are you?

A Syfy horror western, Wynonna Earp stars Melanie Scrofano in the title role. Shamier Anderson, Tim Rozon, and Dominique Provost-Chalkley also star. Based on the Beau Smith comic, the story centers on lawman Wyatt Earp’s demon-fighting great-great-granddaughter, who inherited his abilities, as well as his legendary gun. As a special agent of the US Marshals’ secret Black Badge Division, Wynonna works with her younger sister, Waverly (Provost-Chalkley), Agent Xavier Dolls (Anderson), and Doc Holliday (Rozon), to end to the Earp curse, for good.

The third season of Wynonna Earp averaged a 0.11 rating in the 18-49 demographic and 472,000 viewers. Compared to season two, that’s down by 6% in the demo and down by 5% in viewership. Find out how Wynonna Earp stacks up against the other Syfy TV shows.

Although it premiered with mixed numbers (compared to last year), it is still too early to use those ratings to predict whether Syfy will cancel or renew Wynonna Earp for season four. I’ll keep an eye on the Nielsens and update this page with breaking developments. Subscribe for free Wynonna Earp cancellation and renewal alerts.

7/22/18 Status Update: Syfy has announced that Wynonna Earp has been renewed for a fourth season. Details here.

What do you think? Are you glad that the Wynonna Earp TV show was renewed for season four and season five? How will you feel finances derail the fourth and fifth season and necessitate Wynonna Earp‘s cancellation?

As of right now, season 4 has been delayed and may never happen. There is no money for the show. Maybe everyone will do it for free. There’s a thought.

Resource based economy
Reply to  worthymagic

Money is literally created out of thin air and most exists as digits in a computer (all “rules” about money are made up by people, rules like that can be changed since they’re not laws of nature), I wish more people knew this…I think the world would be a different place.