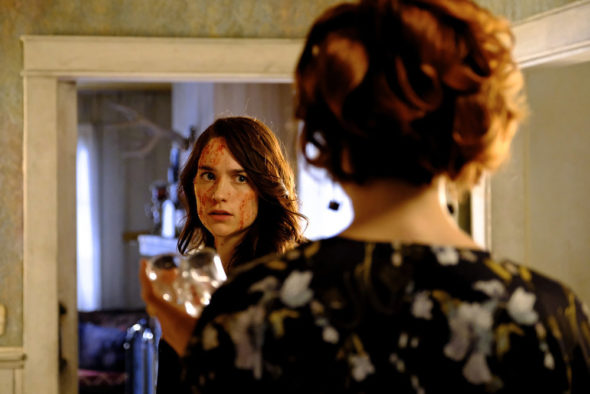 How goes the fight to defeat the Earp family curse during the third season of the Wynonna Earp TV show on Syfy? As we all know, the Nielsen ratings typically play a big role in determining whether a TV show like Wynonna Earp is cancelled or renewed for season four. Unfortunately, most of us do not live in Nielsen households. Because many viewers feel frustration when their viewing habits and opinions aren’t considered, we’d like to offer you the chance to rate all of the Wynonna Earp season three episodes here. **Status update, below.

A Syfy horror western, Wynonna Earp stars Melanie Scrofano in the title role. Shamier Anderson, Tim Rozon, and Dominique Provost-Chalkley also star. Based on the Beau Smith comic, the story centers on lawman Wyatt Earp’s demon-fighting great-great-granddaughter, who inherited his abilities, as well as his legendary gun. As a special agent of the US Marshals’ secret Black Badge Division, Wynonna works with her younger sister, Waverly (Provost-Chalkley), Agent Xavier Dolls (Anderson), and Doc Holliday (Rozon), to end to the Earp curse, for good.

What do you think? Which season three episodes of the Wynonna Earp TV series do you rate as wonderful, terrible, or somewhere between? Should Syfy cancel or renew Wynonna Earp for a fourth season? Don’t forget to vote, and share your thoughts, below.

**7/22/18 Status Update: Syfy has announced that Wynonna Earp has been renewed for a fourth season. Details here.

**2/22/19 Status Update: Syfy has reportedly renewed Wynonna Earp through season five, but financing for the fourth and fifth season is in doubt. Details here.

We enjoy the show. The main character pregnancy last year wasn’t worked very well into the plot line. We totally understand that the actors have children. Looking forward the care free attitude that she has returning to this season.

Love Wynonna Earp, hope to see it renewed for another season. Looking for for the premier tonight of Killjoys.