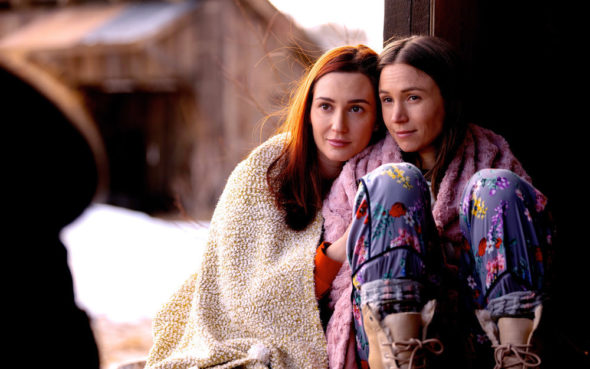 Will things get easier for Wynonna in the fourth season of the Wynonna Earp TV show on Syfy? As we all know, the Nielsen ratings typically play a big role in determining whether a TV show like Wynonna Earp is cancelled or renewed for season five. Unfortunately, most of us do not live in Nielsen households. Because many viewers feel frustrated when their viewing habits and opinions aren’t considered, we invite you to rate all of the fourth season episodes of Wynonna Earp here.  *Status Update Below.

A Syfy horror western, Wynonna Earp stars Melanie Scrofano, Tim Rozon, and Dominique Provost-Chalkley. Based on the Beau Smith comic series, the story centers on lawman Wyatt Earp’s demon-fighting great-great-granddaughter (Scrofano), who inherited his abilities, as well as his legendary gun. As a special agent of the US Marshals’ secret Black Badge Division, Wynonna worked with her younger sister, Waverly (Provost-Chalkley), Agent Xavier Dolls (Shamier Anderson), and Doc Holliday (Rozon), to end to the Earp Curse, for good. In the fourth season, the infamous Earp Curse is broken, and Wynonna would love to be celebrating but instead has to rescue everyone she loves, save the town of Purgatory, and take on her most diabolical, Earp-hating enemy yet — all without her trustworthy gun, Peacemaker.

What do you think? Which season four episodes of the Wynonna Earp TV series do you rate as wonderful, terrible, or somewhere between? Do you think that Wynonna Earp should be cancelled or renewed for a fifth season on Syfy? Don’t forget to vote, and share your thoughts, below.

*2/6/21 update: Wynonna Earp has been cancelled by Syfy but season five is being shopped elsewhere.

After watching a few episodes of season 4… Glad there will be no season 5. Wynonna has turned into a scared scream queen, Waverly and Nicole’s constant PDA and sex scenes, the constant horrible humor, every comment seems to focus on something sexual, and the cast have all forgotten how to act.

#5FIGHTFORWAYHAUGHT Love story #5FIGHTFORWYNONNAEARP Fight for. WynDoc Love story I don’t understand why they won’t renew Wynonna Earp Four Season 5 is got better ratings than Van Helsing did season 5 so far it’s has been been rated the 8th best show I think of all times what’s wrong with any of the networks that won’t pick them up most talked about show in the blog basic needs is Wynonna Earp is the best show out there ever and no one can I pick up the next series or season 5 come on guys use your brains I know we… Read more »

I love Wynonna Earp season 1 through 4 But season 4 was the best the fight for 4 was worth. It $fight for Wynonna Earp so if our fight for season 5. Works out the cast and writer Emily won’t let us down and it will be wonderful

Love this show so much!! It needs to be renewed!!!

I love this show. Especially Wayhaught.

The thing about wynonna earp is there isn’t much of a show like it right now. Most of these kind of shows just focus on action. This one focuses on family, sister love, soul mate love, friendship love, unrequited love. Its the story and the plot and the demons are just a back drop. You can even say they are metaphors like how Buffy tries to do with showing adolescence and growth And the demons you have. I sorta look as this as a continuation type story of Buffy. Which was a show ahead of its time and has gone… Read more »

If Wynonna Earp is not renewed for season 5, do you really believe that the fandom will stand by silently? History has a way of repeating itself. Remember the global solidarity of the W E fandom for season 4? Remember the billboards in New York City?
#FightForWynonna continues………,

When is the second half of Wynonna Earp going to be shown? Great show, love everything about it.

Loved Season 4 episode 1 of Wynonna Earp. The tongue in cheek humor, the confusion of what’s going to happen next. Can’t wait until next Sunday. Come on Wynona and Haught get the bad guys and find Doc and little Sister.

Why won’t the site let us vote on Wynonna Earp?

I was able to vote no problem