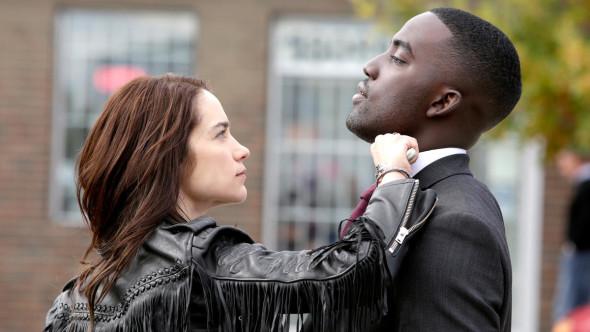 What’s going on with Wynonna Earp? According to The Hollywood Reporter, funding is not available for a fourth season of the Syfy TV show despite a renewal and plans for a fifth season.

Although Syfy has already renewed Wynonna Earp, it’s unclear if the series will ever produce a fourth season. According to THR, the show’s producer, IDW Entertainment, does not have enough funding to justify another season let alone two more seasons of Wynonna Earp.

So is the show cancelled? It’s uncertain as of reporting if/when season four of Wynonna Earp will air. Adam Wyden, a hedge fund founder involved with IDW, told THR that the production company is trying to find a way to come up with the money, but the show’s status is up in the air right now.

Wyden says if a streaming service like Netflix or Hulu can buy the international rights to Wynonna Earp, that should help cover the cost of season four.

What do you think? Do you watch Wynonna Earp? Are you looking forward to season four?

I never knew about this series until 3 months ago. I watched 1-2 seasons on Netflix and 3-4 1/2 on SYFY channel online. Do they take those viewership into consideration? I know so many people that are watching the show though alternative means. Those viewer ships should be included in ratings. I am a huge fan. I am out of demographic I am 54 yrs old.

How about at least one more season to sum things up?

I absolutely love this show!!! It needs to come back for Seasons 4 & 5! Cast is amazing – storylines are amazing!! Let’s not let another quality show disappear!

I love this show. Please bring back to SyFy channel. Putting it on a pay for view channel leaves it impossible for a lot of us to watch. We can’t all afford Netflix or Hulu or even get in certain areas.

I love this show! Please do not cancel another of my favorites!!

Really?? Then get Investors! I’m so tired of losing the shows I like….Till there is nothing worth watching!

Someone tell my how to find the ratings for shows on SYFY network. How can a show that has already been renewed for two seasons can’t find the funding. It’s a great show.

Yeah , right! Oh, we don’t have the funding to continue the production! But… if only Netflix or Hulu, with all their money, would purchase international rights from us, THEN we can continue to make the show! Nudge, nudge, wink, wink. “Money Fight!”

I’m terribly heartbroken that this awful show won’t be back.

I’m in agreement! They should have kept Dark Mater . It was really getting good!

IDW Is the one funding the show. They wasted a ton of money on a male dominated show – of which the pilot will not even be shown – which blew their budget. Fans have purchased over 50+ billboards in times square to support the show and more.. $$ guys are being rude… Fans will not stop the fight

Fascinating stuff. I thought keeping the show going wasn’t a problem, despite the terrible ratings. SYFY is owned by Comcast, which has oodles of money. They don’t want to keep it going? Stay Tuned everyone. I will be writing TVFANATIC and asking them what they know.

The show is very good. Netflix needs to buy it. It has a tremendous amount of fans. It is one of the shows worth saving.