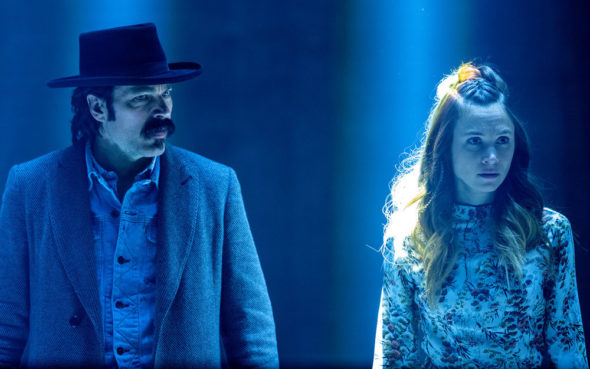 Is Wynonna’s journey coming to an end? Has the Wynonna Earp TV show been cancelled or renewed for a fifth season on Syfy? The television vulture is watching all the latest cancellation and renewal news, so this page is the place to track the status of Wynonna Earp, season five. Bookmark it, or subscribe for the latest updates. Remember, the television vulture is watching your shows. Are you?

Airing on the Syfy cable channel, Wynonna Earp stars Melanie Scrofano, Tim Rozon, and Dominique Provost-Chalkley. Based on the Beau Smith comic series, the story centers on lawman Wyatt Earp’s demon-fighting great-great-granddaughter (Scrofano), who inherited his abilities, as well as his legendary gun. As a special agent of the US Marshals’ secret Black Badge Division, Wynonna worked with her younger sister, Waverly (Provost-Chalkley), Agent Xavier Dolls (Shamier Anderson), and Doc Holliday (Rozon), to end to the Earp Curse, for good. In the fourth season, the infamous Earp Curse is broken, and Wynonna would love to be celebrating but instead has to rescue everyone she loves, save the town of Purgatory, and take on her most diabolical, Earp-hating enemy yet — all without her trustworthy gun, Peacemaker.

The fourth season of Wynonna Earp averaged a 0.06 rating in the 18-49 demographic and 302,000 viewers. Compared to season three, that’s down by 36% in the demo and down by 36% in viewership. Find out how Wynonna Earp stacks up against other Syfy TV shows.

Will Syfy cancel or renew Wynonna Earp for season five? Over a year ago, it was reported that the series had been renewed for a fifth season but the cable channel hasn’t confirmed that. There was a financing issue when it came time to make season four and, for a while, it seemed like a fourth season might not get made. Things worked out but, those financial issues may have scuttled plans to make a fifth season. It’s unclear. For now, especially given the current ratings, I am optimistic that we’ll see a fifth season. I’ll update this page with breaking developments. Subscribe for free alerts on Wynonna Earp cancellation or renewal news.

2/6/21 update: Wynonna Earp has been cancelled by Syfy but season five is being shopped elsewhere.

What do you think? Were you hoping the Wynonna Earp TV show would be renewed for a fifth season? Are you sorry that Syfy cancelled this TV series, instead?

This is the perfect show! They bring it. Truly. If you haven’t seen it you are missing out.

I love the show Wynonna Earp so please don’t cancel it.

I strongly recommend this awesomely fantastic TV series! It’s like a woman’s version of the show called Supernatural but, instead of brother’s running the family business it’s sister’s which is very nice to see. I’d be really upset if the Wynonna Earp TV show ended. I personally ABSOLUTELY LOVE the show & would love to see where Wynonna & Waverly Earps futures lead to. Must make season 5, maybe even a season 6 would be wonderful please & thank you! Like I said I absolutely LOVE this series & I’d DEFINITELY be pretty pissed if they cancel one of my… Read more »

Would love to see a season 5