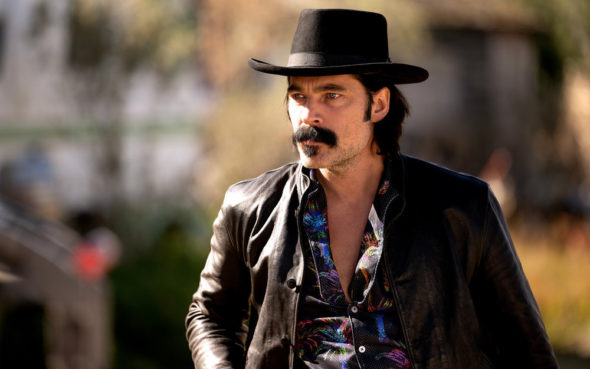 Wynonna Earp is coming to an end this Friday on SyFy, and one of the stars of the series, Tim Rozon, spoke about the show in a recent interview. Melanie Scrofano and Dominique Provost-Chalkley also star in the series which follows one of the descendants of Wyatt Earp.

Rozon said the following about ending the Syfy series, per Assignment X:

“I love the ending of the show. If that is truly the way it ends. Especially for my character. Emily is wonderful, and as a show runner and a writer, she’s very open, and she’s there for you if you need her, but I never bother her, I never ask for things. I’m not that person. I put my trust in what they do, and I perform, and I understand that I have a job to do, and sometimes my character is going to do things that aren’t so great, and I understand that. But the way it all came together, I remember telling Emily, ‘Thank you. I thought you did an incredible job with this character. You showed him so much love and compassion and growth.’ It was really touching.”

As for saying goodbye to Doc Holliday, his character on Wynonna Earp, Rozon said the following:

“I was aware of it the entire time, so I tried to literally enjoy every second that I possibly could with that character. It’s difficult, now that it’s more real than ever, that the show most likely isn’t coming back, to say goodbye to that character. I think most people understand that it’s one of my favorite characters I’ve ever played. He just has a special place in my heart, the old cowboy. So, yeah, it’s tough. There’s just something so special about this show.”

What do you think? Are you sad to see the Wynonna Earp TV series end on Syfy? Would you like it to continue for a fifth season somehow?

I have been an Earper since the beginning…. I am praying that this wonderful show will get picked up by Netflix or Amazon because I will be beyond devastated if this is truly the end. WYNONNA FOREVER!

I just watched the final episode here down under and I have to say this has been one of my fav shows. I love the characters and the cast that play them and finding out this was the last ever episode is pretty heartbreaking. If I could vote for one show to come back it would be this one. To me 4 seasons of a great show just isn’t enough but at the end of the day if it has to end it ended the right way and sometimes what makes a show great is they don’t drag it out… Read more »

I’m so upset! I love all the characters, especially that Tim Rozon, he’s One Sexy Cowboy! This is truly heartbreaking, I’ve been a true fan since,season1, I pray they make more season’s, I’m a True Die Hard Fan! Going 2 miss watching every actor & actress, that played on the show! Good luck u all! I will miss u all so much! ❤️

This is one of the best sci fi shows on right now. The characters are real in how they act and talk that you almost forget it is scripted.

I am a big fan. I would love the series to continue