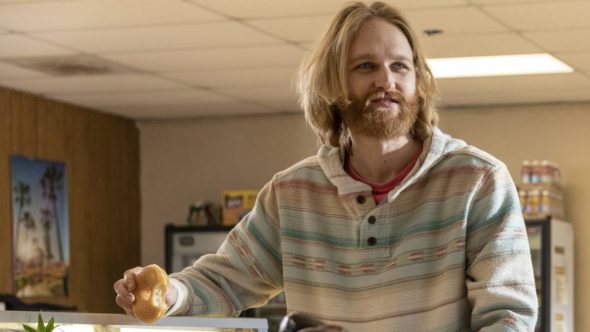 Lodge 49 may not be completely dead yet. Even though AMC cancelled the series after two seasons, in 2019, star Wyatt Russell is ready to make more. The actor, who now stars as the new Captain America in The Falcon and the Winter Soldier series, wants to revive the series in some form.

Brent Jennings, Sonya Cassidy, Linda Emond, David Pasquesi, and Eric Allan Kramer also star in the series follows Dud (Russell), a surfer who joins a fraternal retreat after the death of his father.

Russell said the following about the potential for a return of Lodge 49, per Entertainment Weekly:

“I’m the fan going, ‘When’s season 3 happening? Lodge 49 holds such a special place in my heart. ‘The people that it connects with, it really connects with, on a level that Jim Gavin, the writer, and [executive producer] Peter Ocko really wanted it to. No matter how far you get from it, where you go, what dimension you’re in, that show will always have the opportunity to have another iteration of it in some way,” he explains. “I was talking to Jim the other day. I was like: ‘Ten years down the line, five years, next year, I’m always here for Lodge. Make a movie, make a TV show, another episode: I’m here, I’m in, I’m down. For all the Lodge fans out there, make it happen.”

The former AMC series is available on Hulu for viewing.

What do you think? Are you a fan of Lodge 49? Do you want to see more of the quirky series?

I watched every episode. I would love to see season three and more. Re show season one and two. You will get the viewers. A lot of people dont know about this show.

Please, please, please bring back Lodge 49. It is one of the best shows I’ve come across in quite awhile. Colorful characters, intrigue and mystery why did it not catch on for more seasons?

Please, please bring this back. This show gave me comfort like no other. Season 3-4 are already written and just need a pickup. My heart aches that it ended too soon. The story wasn’t finished. Most original, whimsical, relatable show of pandemic era tv. <3

I loved Lodge 49…..every single character was so well done and season 2 was perhaps a perfect season…..we need more!

I was surprised when the show was canceled. It was so funny.
PLEASE BRING LODGE 49 BACK FOR 3rd SEASON!!! Good Luck

Bring back the lodge season 3

We want another season!!! The writing is great and there are so many places it could go.

Loved it. In this day and age we need some optimism

I love this show. I hope it comes back!

I loved that show Lodge 49, I hope Wyatt succeeds in getting it back somehow! You’re a good actor, was a fun series!!

Great show. The story needs to be told!

Great show, I can’t believe some ass hat decided to cancel it.