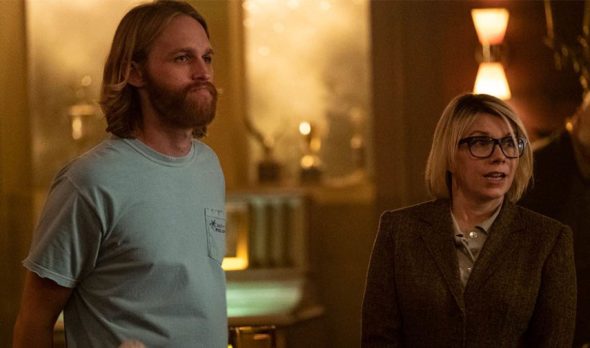 Lodge 49 was recently canceled by AMC after two seasons, but those behind the series are fighting to save the series and bring it back to the small screen. Paul Giamatti, Dan Carey, Jim Gavin and Peter Ocko are shopping the series to other networks, and many high profile names, including Tom Hanks, have taken to social media to help save the series.

Giamatti has sent emails out to several outlets that mention lack of promotion for the AMC series. Now, Giamatti and the rest of the Lodge 49 team is hoping to find a streaming home for the series.

Per the Los Angeles Times, Giamatti said the following about the search for a new home:

“Having a streaming situation would be nice for this show, because I think it really blossoms more for the viewer when you can watch it end-to-end. It seems like a rich thing that could fall in somebody’s lap.”

Giamatti also talked about the cancellation of the series. He said that, “I’m distressed more at the larger sense that a show like this doesn’t have a place in the world. It’s absurd to me. There’s a place for this. In the larger landscape of TV, it fits in fine. There’s all kinds of weird things on. Fleabag is weird.”

What do you think? Are you a fan of Lodge 49? Do you want to see the series return for season three on a new home?

Best show I’ve scene in a long time. Wonderful Humor and Whitty punch lines. The love and family atmosphere that the actors create is a incredible opportunity to escape life’s trouble and Hour at a time. Please Someone bring back LODGE 49.

Someone please air this show. My husband and I think it is one of the best shows on the small screen.

This show is fantastic and is actually an experience that draws in anyone that might feel a bit lost, I know it gives me some comfort. I know this is fiction, but is certainly art that imitates life, and wonderful, tragic, beautiful art it is.

Truly one of the best shows I have ever seen. must be saved.