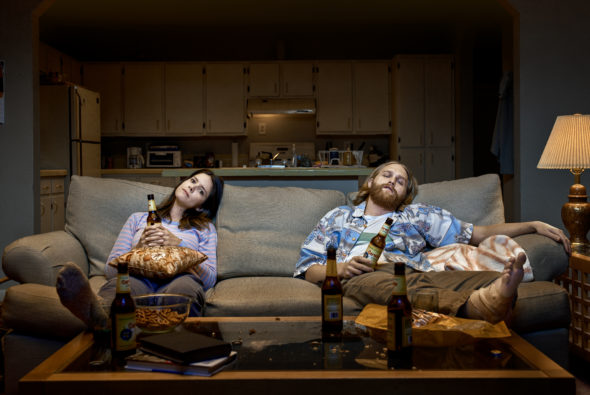 What has Dud gotten himself into? Is the Lodge 49 TV show cancelled or renewed for a second season on AMC? The television vulture is watching all the latest cancellation and renewal news, so this page is the place to track the status of Lodge 49, season two. Bookmark it, or subscribe for the latest updates. Remember, the television vulture is watching your shows. Are you?

Will AMC cancel or renew Lodge 49 for season two? The ratings are mediocre for an AMC series so it could go either way. Right now, I suspect that it will be renewed. I’ll keep a hungry eye on the ratings and update this page with breaking developments. Subscribe for free Lodge 49 cancellation or renewal alerts.

What do you think? Are you glad that AMC has renewed the Lodge 49 TV show for season two? How would you feel if AMC had cancelled this TV series, instead?

Garbage show that’ll wind up in the garbage can of history with other shows like Lost. Don’t be a sucker and let this go-nowhere show lead you on a second further. It has no plot, just devices.

I completely disagree. First season was FUN.Looking forward to season 2.

We have really gotten into watching Lodge 49. You never know what a new show is going to entail but we really like this one. It’s not so predictable like most. You wonder how this guy dud is going to be and it turns out he’s really a good guy. I would be extremely disappointed this show was cancelled. Really want to see where it’s going. Will stay tuned for the new debut date.

I read here just now, that there’s going to be a season two. And I agree, it’s totally not predictable. That’s what makes it a fun ride. It keeps surprising me.

Loved the show – it seemed so hopeful.

And though I found the very last show a little depressing in tone, I can’t wait to see next season.

Lodge 49 is the distillation of everything great about the potential future on television programming. I hope it gets renewed. Have some balls, renew it, real reward when the world catches up. Have faith. It won’t take long. The fact you may think it hasn’t happened yet is myopic when the analysis needs to not be myopic.

Rewatching the whole season again. Waiting for the 2nd season.

Watched the whole season on demand the last couple weeks! Beautiful and strange show, really very special. I hope it sticks around for a long time to come.

Dud’s dad had nothing to do with the lodge, he found a ring in the sand.

It should return, it’s a cool show!

Good catch, Troy.
Dud joined the Lodge 49 on his own. His father wasn’t a member.
Hope the show continues.

Thanks for the note. The press materials seemed to indicate that he did.

Fingers crossed for a second season!

Yes this show is great and needs to be renewed. What a great refreshing change. I loved this show!!!