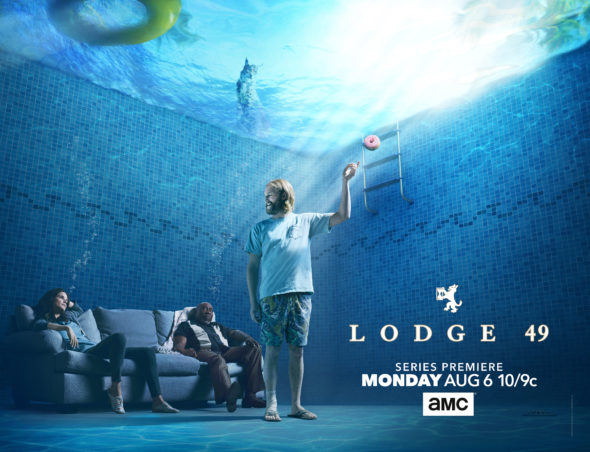 With The Walking Dead growing long in the tooth, AMC is in need of a new hit. Enter the new Lodge 49 TV show. With this modern-day fable, has the cable network hit upon the formula for Nielsen ratings gold? Will Lodge 49 be cancelled or renewed for season two? Stay tuned. *Status update below.

What do you think? Do you like the Lodge 49 TV series? Should it be cancelled or renewed for a second season on AMC?

I love the quirky characters, who are so well developed. It would be a real loss for the Lodge to be cancelled in its infancy. I think as more people hear about it and start watching, it will develop a large fanbase – Not just us weirdos who have been lucky enough to find it already!

I hope Wyatt Russell wants a Season 2 of Lodge 49 because WE would be really lucky to get another season or two with him. No doubt he’s headed for super success and Lodge 49 will be a cult classic. So, might as well make plenty of episodes while you can. The show is sublime and the entire cast so funny and authentic. Truly, I am looking into finding a lodge of my own and if it isn’t like Lodge 49 just yet, well at least I have an idea of what it should be. Thanks to Jim Gavin we… Read more »

I agree with the comments. Lodge 49 is an entertaining show, with quirky characters and interesting plot. “Save the Lodge!”

Please oh please don’t cancel this show…ever since Breaking Bad ended I’ve just been floundering from one crappy show to another !! Look how great BreakingBad was and no one watched the first season ( except for me) this is a great show that has so much potential!! Plus you can’t go by the 18-49 crowd cuz they all watch Netflix

Please do not cancel this show I really enjoy it a lot! I’m very impressed with the level of acting and also with Wyatt Russell I know he comes from good genes being Goldie Hawn and Kurt Russell’s son. I have rewatched almost every episode because it is definitely pulling me in if there is a way to try to get the show to not be canceled please let me know I would definitely do a petition which I’ve never done in my life or help advertise on my Facebook page which I have around 5000 friends!

Please keep this show growing! It is such an original concept…..in addition to being SO special in so many ways….the writing, acting, direction, cinematography are ALL excellent!