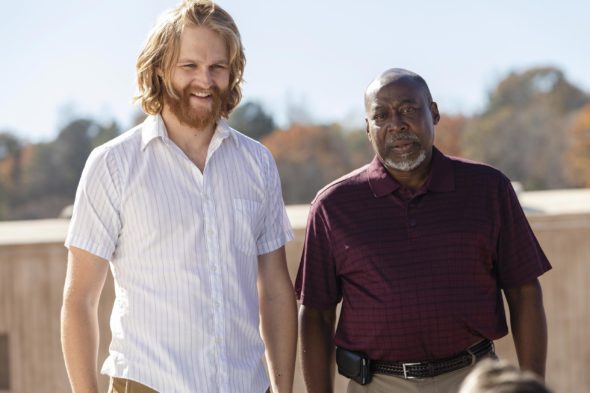 Lodge 49 is not going to return. AMC canceled the series after its second season last month, and the people behind the series fought to find the series a new series. One of the creators of the series threw in the towel on his Twitter account today.

The cast of Lodge 49 includes Wyatt Russell, Brent Jennings, Sonya Cassidy, Linda Emond, David Pasquesi, and Eric Allan Kramer. The creator mentioned them all by name in his message to the fans. During its second season, the series averaged 198,000 viewers per episode.

Jim Gavin said the following in a number of tweets about the AMC series:

“DEAR LYNX, it breaks my heart to announce that LODGE 49 won’t be going forward. We tried very hard to find a new home, but there were no takers. Ratings, metrics, algorithms…que sera, brah. I will write a proper postscript soon, but for now a few thoughts. Re: AMC…Mixed feelings! Even after our cancellation we made just about every major top ten list alongside all the big shows. That’s not easy to do and it makes me so proud. We delivered something special & I think it’s fair to say that we deserved a chance to finish our story. That said, AMC were the ONLY place willing to take a chance on LODGE 49. Creatively, they were amazing, letting us make the show we wanted. It’s a miracle we got two wonderful seasons and I’m forever grateful. I hope the next TV show that focuses on plumbing and hermeticism becomes a ratings smash. But until then! Maybe it’s fitting that a show about a secret society remains a secret. Something people have to search for, or stumble upon, like a ring in the sand. To our amazing fans, thank you for fighting for the show. Your patience, enthusiasm, solidarity, & creativity have meant the world to all of us. We have to accept the exile our knowledge requires, but the lodge is where you take it & the doors are always open. Lynx for life.

Here’s the good news. LODGE 49 is still a thing in the world! We looked at each season as a ten hour movie, to be watched more than once, like all the things we love. I do think there is a sense of wholeness to what we’ve made and I know that will continue to reward viewers. When both seasons land on Hulu in 2020, let’s make a celebration of it. The thing that stings most is not being able to go back to work with our once in a lifetime cast. Wyatt Russell, Brent Jennings, Sonya Cassidy, Linda Emond, Eric Allan Kramer, David Pasquesi. They are the best and their performances will only grow in stature. I will write more about our cast and crew, and all the incredible writers in our room, but for now let me say that the sense of joy and connection in the show reflected the working atmosphere created by all of these kind, brilliant and hilarious people. I love you all.

I want to thank our executive producers Dan Carey and Paul Giamatti, two of the best humans ever. Their love of the show and deep knowledge of all its crazed literary and alchemical underpinnings made all of this so easy and fun. I want to thank our co-ep, @ncjack , gracious and indefatigable, a legendary magician in the world of production. She was the glue that held it all together, and on a daily basis she was willing to lend me her phone charger. The best part of all this was working every day with showrunner, @rockoocko . He’s a comic genius, a master of character and story, but more imporantly he always leads with his heart. The goodness of his soul, and his wish for a better world, were the driving forces of LODGE 49.

Cruelty is weakness. Laughter is a prayer.

Personally, LODGE 49 changed my life. I put everything I know and love into it. Every shit job, every failure, every loss, every hope, every song, every book, every kindness given to me, every little thing that brought me joy. What a privilege. No one should be so lucky. Working on LODGE 49, with so many incredible people, was the greatest honor of my life. I can’t put into words how proud it makes me. We made something beautiful and I know it will stand the test of time. Finally, my greatest hope is that people will continue to find LODGE 49, and when they do I hope that, like Dud, they feel less alone. ‘The greatest thing You’ll ever learn Is just to love And be loved In return’ #lodge49forever”

What do you think? Are you sad that Lodge 49 was not saved? Are you a fan of the AMC series?

Absolutely loved Lodge 49 and I am EXTREMELY disappointed that there won’t be another season. There aren’t many (if any) shows that flow with the quirkiness and true to life events that Lodge 49 has. Shame on AMC for canceling something original and clever.

I just found Lodge 49 on Hulu, and now it’s gone. I love the Lodge and want to be a member. I fell in love with the endearing characters and will miss them sorely. Lodge 49’s demise feels like an unfinished love story, an unfinished mystery, a grand tale of ordinary yet remarkable characters unfulfilled. — Miles K.

My husband and I watched Lodge 49, both seasons, in just a couple of weeks. We loved it. The characters were so human and we felt their sadness, depression and particularly their joy, thats what stood out for me, the joy. it was such a breath of fresh air from all the cynical stuff on TV today. we couldn’t believe when it finished. We were truly hoping it was just a delay and were very sad to hear Lodge 49 wasn’t coming back. Thanks to everyone involved. Congratulations on making one of the best shows for years.

I would have canceled all of the washed out walking dead franchise before I killed Lodge 49. Will not watch AMC again.