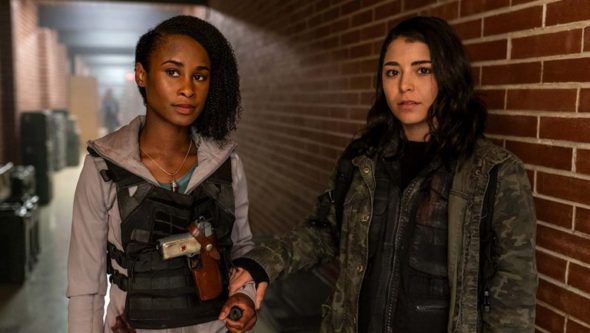 You can put a stake in Van Helsing but the show’s not dead yet. The Canadian TV series, which airs on Syfy in the United States, has been renewed for a fifth and final season of 13 episodes. Season four concludes this Friday night. Season five production will begin in early 2020 and the last episodes will begin airing later in the year.

A horror-fantasy series, Van Helsing, stars Kelly Overton, Jonathan Scarfe, Christopher Heyerdahl, Neal McDonough, Vincent Gale, Rukiya Bernard, and Aleks Paunovic. Joining the cast are Tricia Helfer, Richard Harmon, Nicole Munoz, Keeya King, and pro-wrestler Big Show. The show centers on Van Helsing descendent Vanessa “Van” Helsing, who awoke from a coma to find vampires had overtaken the world. A prime target for the vampires, she’s also humanity’s last hope with her immunity to vampires and her ability to turn them into humans. In season four, the first of four vampire elders has been freed and legend has it that when their four Totems are combined, the Dark One will be resurrected. It’s a race against time as Van and her ragtag group of heroes face off against the forces of darkness.

“We are thrilled to be able to bring the amazing Van Helsing saga to a close,” said executive producer Chad Oakes, according to THR. “This could not have been done without the support of our incredible cast, crew, Syfy, Netflix, and Super Ecran.” Netflix distributes the series globally while Super Ecran releases it in Quebec.

What do you think? Do you like the Van Helsing TV show? Is season five a good time to end the show or, would you have been open to a sixth season?

I would love more series. I really love the show. Can’t wait for season 5

I don’t want the show to end; hopefully Netflix will continue with it! I can’t believe, “What We Do In The Shadows” is still on and being renewed; when it is the worse vampire show I have ever seen!!! How you can consider keeping it, instead of this show; is beyond me!!!! I like watching a show, that has actors that can actually act! I’m tire of all the stupid reality shows too! People want to come home and watch something that takes their mind off of all the terrible things going on in the world; not watch people backstab… Read more »

I’ve enjoyed the series from the beginning and I’m looking forward to season 5. It would seem to me that with good writers and a vision this can progress further with a revival of civilization.

I love love love love this TV series…….I love all the main cast memberss and would be grateful if we had more than 5 seasons……I hope Kelly Overton is in all episodes in S5…….BEST TV SERIES EVER

Yes there should be a 6-8 seasons! Awesome show. Darn it!

I freakin love this show! I watched all four seasons 3 times on Netflix. It had a slow start in season 1 Ill admit but they came through in the following seasons.
Would have loved if it had gone on for more seasons but ill ill settle for the fifth season being the last.

They should have as many seasons as the Walking Dead.