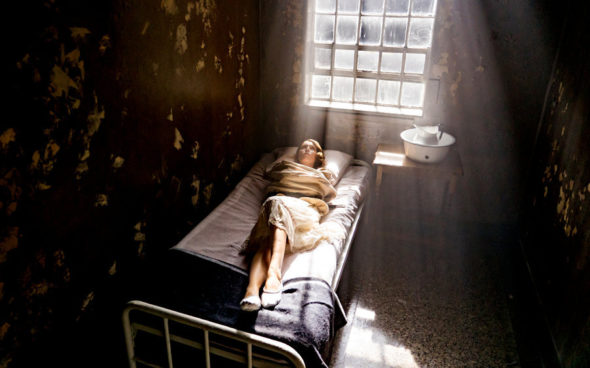 Does Vanessa’s mission continue? Is the Van Helsing TV show cancelled or renewed for a fourth season on Syfy? The television vulture is watching all the latest cancellation and renewal news, so this page is the place to track the status of Van Helsing, season four. Bookmark it, or subscribe for the latest updates. Remember, the television vulture is watching your shows. Are you?

A Syfy horror drama, Van Helsing stars Kelly Overton, Jonathan Scarfe, Christopher Heyerdahl, Missy Peregrym, Vincent Gale, Rukiya Bernard, Trezzo Mahoro, and Aleks Paunovic. It centers on Van Helsing descendent Vanessa (“Van”) Helsing, who awoke from a coma to find vampires have overtaken the world. Since Van has a unique blood composition which makes her immune to vampires and allows her to turn them into humans, this vampire hunter is their prime target. In Van Helsing, season three, after being bitten by a shape-shifting Elder vampire loyal to the Van Helsing clan, Vanessa is once again resurrected. Now she must confront her family’s legacy. At Crooked Falls, Axel (Scarfe), Scarlett (Peregrym) and the others fend off Blak Tek’s forces who hope to add Scarlett to their list of lab rats.

The third season of Van Helsing averaged a 0.09 rating in the 18-49 demographic and 384,000 viewers. Compared to season two, that’s down by 29% in the demo and down by 10% in viewership. Find out how Van Helsing stacks up against the other Syfy TV shows.

Will Syfy cancel or renew Van Helsing for season four? The show’s drawing low numbers but it’s in the middle of the pack when compared to the channel’s other scripted series. So, I think it will be renewed. I’ll keep an eye on the ratings and keep you posted. Subscribe for free updates on any Van Helsing cancellation or renewal news.

What do you think? Are you glad that the Van Helsing TV show has been renewed for a fourth season? How would you feel if Syfy had cancelled this TV series, instead?

I want to know will Scarlett be back on season four as a vampire.

Me & my son just love this show. I’m very glad that it was renewed.

Love the show. Hoping for renewal

Excellent production ain’t seen season 3 only got Netflix hasn’t arrived yet. So high expectations. Hope it’s renewed for a forth season.