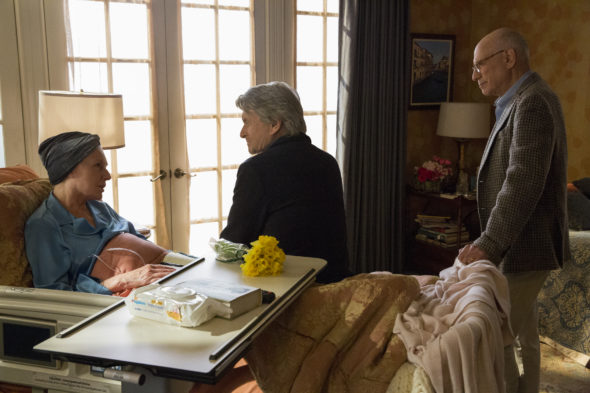 Can Sandy and Norman keep other laughing through the tears? Has The Kominsky Method TV show been cancelled or renewed for a second season on Netflix? The television vulture is watching all the latest TV cancellation and renewal news, so this page is the place to track the status of The Kominsky Method, season two. Bookmark it, or subscribe for the latest updates. Remember, the television vulture is watching your shows. Are you?

Unless they decide to publicize viewership, it is difficult to predict whether Netflix will cancel or renew The Kominsky Method for season two. As long as the stars want to continue, I think it will be renewed. For now, I’ll keep an eye on the trades and press releases and update this page with breaking developments. Subscribe for free The Kominsky Method cancellation or renewal alerts.

What do you think? Are you glad that The Kominsky Method TV show has been renewed for a second season? How would you feel if Netflix had cancelled this TV series, instead?

This show went immediately to tie with first place of my all time favorites – Lucille Ball’s early episodes of I Love Lucy.. the only show until now spurred out loud chuckles.