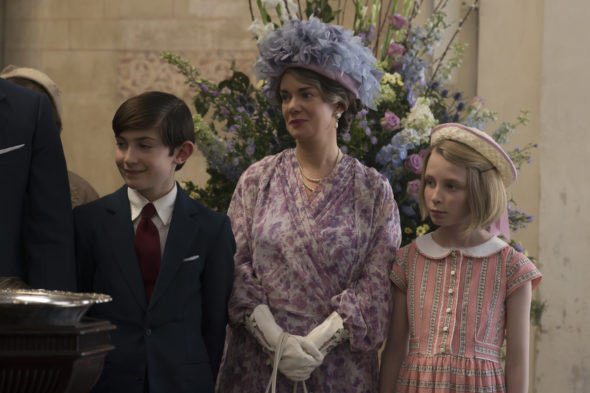 Will God save the Queen? Has The Crown TV show been cancelled or renewed for a third season on Netflix? The television vulture is watching all the latest TV cancellation and renewal news, so this page is the place to track the status of The Crown, season three. Bookmark it, or subscribe for the latest updates. Remember, the television vulture is watching your shows. Are you?

Streaming on the Netflix paid subscription platform, The Crown stars Claire Foy, Matt Smith, John Lithgow, Victoria Hamilton, Jared Harris, Vanessa Kirby, and Dame Eileen Atkins. The historical drama unfolds during the reign of Queen Elizabeth II (Foy). Inspired by creator Peter Morgan’s 2006 feature film, The Queen and 2013 stage play, The Audience, it centers on two of the most famous addresses in the world — Buckingham Palace and 10 Downing Street — and tells the inside story of power plays, political maneuvers, and love affairs therein.

While Netflix has yet to announce a third season renewal, pre-production work is already underway. Netflix has expressed a desire for up to six seasons, but that’s not set in stone.  Subscribe for free alerts on The Crown cancellation and renewal news.

What do you think? Do you hope The Crown TV show will be renewed for a third season? How would you feel if Netflix cancelled this TV series, instead?

I hope they don’t cancel The Crown. It is fascinating and humanizes the Royals. I understand that it’s fiction based on fact, but it gives me great insight into Queen Elizabeth and her past. I’m hooked.

Please renew this program, it’s interesting, well written and good television. Something hard to get nowadays!

Great series. Hope there is a third season.

I hope this series really run its full course, it is very interesting, well written and superbly played.