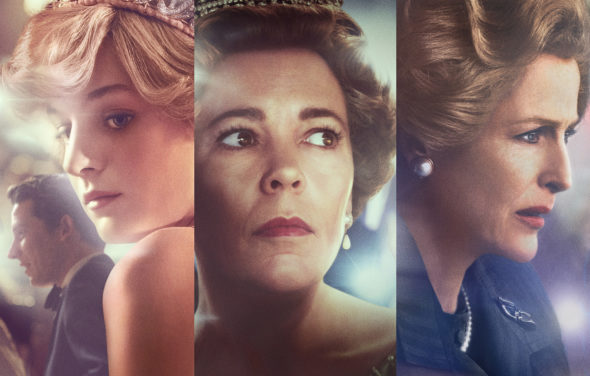 What could go wrong with a storybook wedding?  Has The Crown TV show been cancelled or renewed for a fifth season on Netflix? The television vulture is watching all the latest cancellation and renewal news, so this page is the place to track the status of The Crown, season five. Bookmark it, or subscribe for the latest updates. Remember, the television vulture is watching your shows. Are you?

Streaming on the Netflix paid subscription platform, season four of The Crown stars Olivia Colman, Tobias Menzies, Helena Bonham Carter, Ben Daniels, Marion Bailey, Erin Doherty, Josh O’Connor, Emerald Fennell, Charles Dance, Gillian Anderson, and Emma Corrin. The historical drama unfolds during the reign of Queen Elizabeth II (Colman) of the United Kingdom, covering the events between 1977 and 1990. Elizabeth and her family find themselves preoccupied with safeguarding the line of succession by securing an appropriate bride for Prince Charles (O’Connor), who is still unmarried at 30. As the nation begins to feel the impact of divisive policies introduced by Britain’s first female Prime Minister Margaret Thatcher (Anderson), tensions arise between her and the Queen which only grow worse as Thatcher leads the country into the Falklands War. While Charles’ romance with a young Lady Diana Spencer (Corrin) provides a much-needed fairytale to unite the British people, behind closed doors, the Royal family is becoming increasingly divided.

Unless they decide to publicize viewership, it is often difficult to predict whether Netflix would cancel or renew The Crown for season five. However, this series is one of the streaming service’s most popular shows and it has already been renewed through a sixth and final season. I’ll keep my ears open and an eye out for news, and will update this page with breaking developments. Subscribe for free alerts on The Crown cancellation or renewal news.

What do you think? Are you glad that The Crown TV show has been renewed for a fifth season? How would you feel if Netflix had cancelled this TV series, instead?