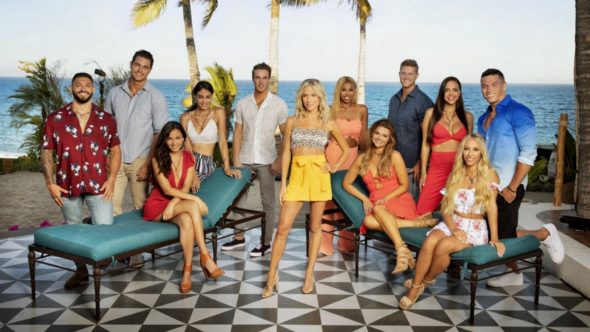 TV show description:
A FOX reality series, Paradise Hotel first aired on FOX in 2003. It was cancelled and later revived for a second season on Fox Reality Channel and MyNetworkTV in 2008. In 2018, FOX announced that the network would revive the series once again. Kristin Cavallari hosts this latest incarnation.

The series follows a group of singles as they’re given what could be the opportunity of a lifetime. They can check in to an exclusive tropical resort and potentially check out with a big cash prize.

Immersed in a beautiful and remote setting, these single strangers are surrounded by sun, fun, and romance — all while trying to win the big prize. The contestants will have to scheme and strategize to keep a spot in paradise.

Each week, the players vote off one of their fellow residents to make room for a new guest. In the current version of the game, home viewers can play along by helping to decide who stays and who goes. They’ll use social media to try and influence what happens on their screen.

Series Finale:
Episode #7
The last couple standing will walk away with the biggest prize of the summer — and maybe even love.
First aired: June 6, 2019.

What do you think? Do you like the Paradise Hotel TV show? Do you think it should have been cancelled or renewed for a second season?

I can’t believe FOX would lower it’s self with this crap. That’s MTV/E’s job. Sard6