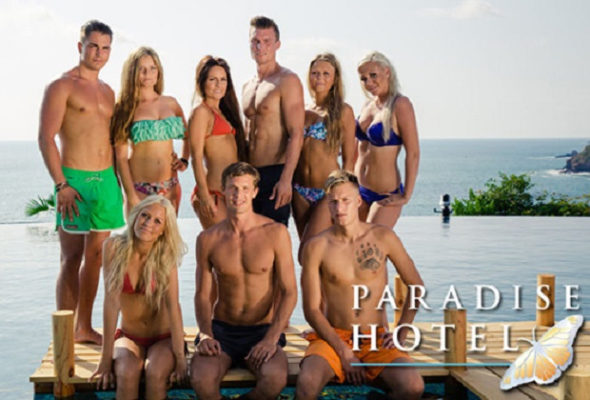 FOX is headed back to paradise. Today, the network announced they’ve ordered a revival of the cancelled TV show.

The reality series “follows a group of singles who are given the opportunity of a lifetime – to check in to an exclusive tropical resort – and check out with big money.” The show originally ran on FOX in 2003 before being cancelled and then rebooted by MyNetworkTV in 2008.

FOX has not yet announced a premiere date for their Paradise Hotel revival, but the new series is currently casting.

FOX opens the doors to a brand-new PARADISE HOTEL, the innovative unscripted competition series in which each guest tries to remain in paradise as long as possible. The modernized version of the international hit is executive-produced by SallyAnn Salsano (495 Productions, “Jersey Shore Family Vacation,” “Jersey Shore,” “Floribama Shore,” “The Bachelor”); Becca Walker (“Love Island,” “I’m A Celebrity Get Me Out of Here”); and Celia Taylor (“50 Ways to Kill Your Mammy,” “A League of Your Own, with James Corden,” “An Idiot Abroad”) of Mentorn Media, the original creators of the groundbreaking “Paradise Hotel” format.

PARADISE HOTEL follows a group of singles who are given the opportunity of a lifetime – to check in to an exclusive tropical resort – and check out with big money. Immersed in a gorgeous setting, these strangers will be surrounded by sun, fun and romance – all cloaked in a wild competition. This paradise won’t last forever…it will take strategy to remain there. Each week, these singles will vote off one of their fellow residents to make room for a new guest. In a new twist, viewers can play along at home, using social media to try and influence what happens on screen, including helping to decide who stays and who goes.

“PARADISE HOTEL was a show ahead of its time, and this incredible team of producers plan to take it to the next level,” said Rob Wade, President, Alternative Entertainment and Specials, Fox Broadcasting Company. “The format allows for a delicious mix of love, drama and humor with a uniquely FOX twist. By using fresh interactive elements, it enables fans to orchestrate the show’s narrative, making it can’t-miss television for a new generation of viewers.”

“When love, power and money are the stakes, doing the right thing can sometimes take a back seat. Guessing who will do what’s right to find ‘the one,’ while others are focusing on the jackpot, makes this super exciting,” added Salsano. “This time around, viewers using their social media feedback to influence what happens on screen is a game-changer and will keep us all on edge.”

“To re-create, re-imagine and re-open the doors to PARADISE HOTEL again for a new generation is incredibly exciting,” noted Taylor. “It remains a format ahead of its time that works perfectly in our digital world.”

PARADISE HOTEL is currently casting. Contestants must be at least 21 years old and single. For more information, eligibility and other terms and conditions, and to apply, please visit ParadiseHotelCasting.com.

Having first aired on FOX in 2003, PARADISE HOTEL then became an international hit, produced around the world in more than 18 countries.

What do you think? Do you remember Paradise Hotel? Would you watch the revival?