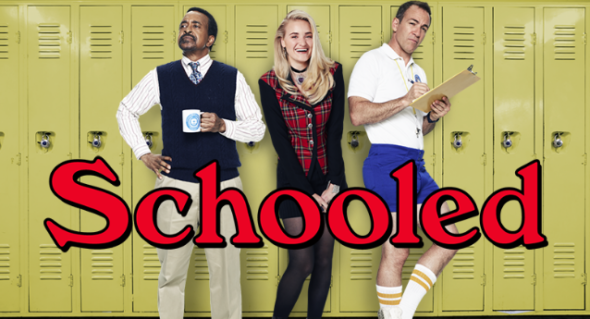 Schooled has a new principal. Deadline reports The Kids Are Alright creator Tim Doyle has been named as the new showrunner for the ABC TV show.

Set in the ’90s, the comedy series follows Lainey Lewis (AJ Michalka) and the faculty of William Penn Academy. Although Lainey once matriculated there, she’s taking a detour from the pursuit of rock stardom and has returned to teach music. The cast also includes Tim Meadows, Bryan Callen, and Brett Dier.

What do you think? Are you a fan of Schooled? Will you watch season two?

Schooled should be cancelled, and The Kids Are Alright should be brought back. Just sayin’.

I love the show Schooled, and I love Lainey. I’ll be watching the new show.

I really love this show and The Goldberg so much…. They such a cute shows.

Yes I will watch and the goldbergs too

I watched and loved them both. The network needs to sit tight and given another season. Sometime it takes a while to build up a fan base

Not a fan of Schooled. The Kids Are Alright was a much better show and should have been given a 2nd season. (I thinks Kids got cancelled because there was too much testosterone for the female executives at ABC.)

Rose
Reply to  S B

Wish they had given The Kids are Alright a second season instead. ABC is going downhill with their programming in my opinion.

I agree with you. Too bad now we can’t just give comment a thumbs up or thumbs down! Another mistake!

Love schooled. Even though I never watched the goldbergs. One of my favorites and I’m over 50