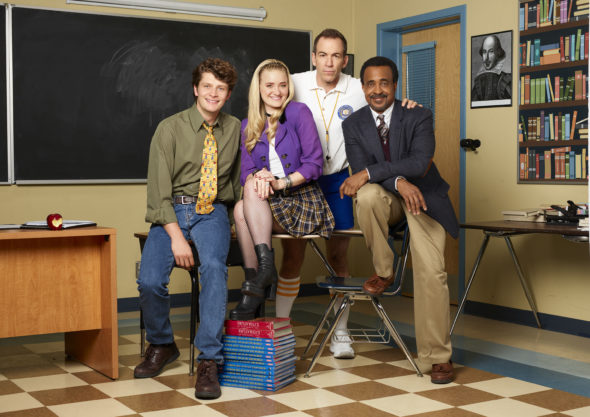 TV show description:
From creators Adam F. Goldberg and Marc Firek, the Schooled TV show is a spin-off of The Goldbergs sitcom. Set in the 1990s, Schooled follows Lainey Lewis (Michalka) and the faculty of William Penn Academy.

A WP graduate herself, Lainey hasn’t yet achieved rock goddess status, so she returns to her old stomping grounds as the school’s new music teacher — working under the supervision of Principal Glascott (Meadows). Making the adjustment from student to authority figure proves a little tricky for Lainey, but as she gets to know people, like Glascott’s niece, Felicia (Rachel Crow), she realizes she may just have the chops for this new gig.

In addition to the principal, Lainey’s new co-workers include Coach Mellor (Callen), who has some struggles of his own, and Charlie Brown (Dier), knowns as “CB” — a young, enthusiastic teacher who strives to be perfect. Even though this odd group has their own quirks and personal problems, their students look up to them as everyday heroes.

Series Finale:
Episode #34 — Clueless
Lainey has a difficult choice regarding her relationship with Barry and her friendship with CB. Meanwhile, Coach Mellor and Julie are put in a tough parenting position when Toby is invited to prom as a freshman by a senior.
First aired: May 13, 2020.

What do you think? Do you like the Schooled TV series? Should this ABC TV show have been cancelled or renewed for a third season?

Great show will miss the laughs.

Should not be canceled. Loved this

This show is excellent, really humorous and has great values! Every character is really believable and so charming! I’m heart-broken that it was canceled!

I think it should run another season. It’s a great show.

Please renew SCHOOLED !
There are so very few shows that I look forward to watching It’s to the point of view shows that I like when they do air them on .
I feel like my kids and grandkids I can repeat the conversations.
I just want to see This TV series renewed is absolutely brilliant and entertaining.
Best of all not offensive!

I was disappointed to hear that this Goldbergs spin off was cancelled. It was thoroughly enjoyable in the same vein as its parent.

Love it! Want to see where all of these relationships go – such funny people!