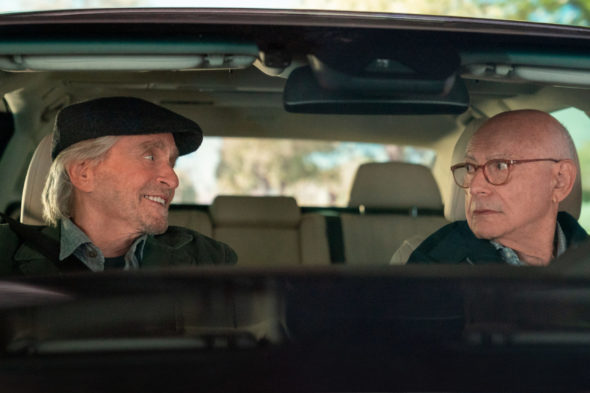 A third and final season of The Kominsky Method is in the works at Netflix but star Alan Arkin won’t be returning. According to Deadline, Arkin has planned to film just two seasons all along and was reflected in the second season’s finale. His character’s exit will be explained when the series returns.

The Kominsky Method stars Michael Douglas and Arkin with Nancy Travis, Sarah Baker, and Susan Sullivan. Actors recurring in season two include Jane Seymour, Jacqueline Bisset, and Paul Reiser. A former star, Sandy Kominsky (Douglas) is now a respected acting coach. Impeccably dressed, Norman Newlander (Arkin) is his best friend and longtime agent. Sandy and Norman keep each other laughing as they navigate the ups and downs of getting older in Los Angeles, a city that worships youth and beauty.

Season two of The Kominsky Method was released in October 2019 and the dramedy series was renewed for a third and final season in July.

Chuck Lorre is behind this Netflix series, and he commented about the third season renewal when it was announced. He said the following:

“The Kominsky Method has been a true passion project for me and it’s been an incredible experience to see the warm response from both audiences and critics. I’m excited to wrap up the story with this final chapter.”

A premiere date has not yet been set for the third season.

What do you think? Are you a fan of The Kominsky Method? Will you watch season three on Netflix without Arkin?

I’m glad to hear that there is going to be a season 3. I wish there would be more, especially if Alan Arkin were to return, he’ll be missed.

I loved the Kominsky series. As a 70+ senior, I can really identify with many of the story lines. Love Michael Douglas as lead.

Shame about Alan Arkin, but even more of a shame that it’s 3 seasons and done.

I love the show! I hate it Alan isn’t coming back – their relationship/chemistry was what made the show so great, but, hey, it’s Michael Douglas and Nancy Travis and Jane Seymour, so it’ll still be good!

I am bummed but will still watch. The two together had great chemistry, but I really like this show and will give it a chance without Alan Arkin!

Why are Chuck Lorre’s leads leaving their shows before they are over?

Well that’s a bummer. I loved them together – such great chemistry