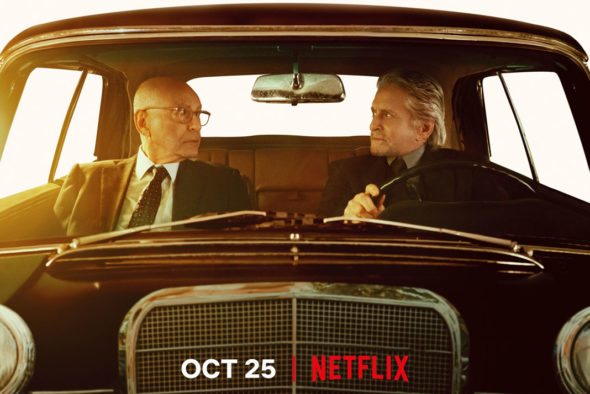 Can Sandy find fulfillment? Has The Kominsky Method TV show been cancelled or renewed for a third season on Netflix? The television vulture is watching all the latest cancellation and renewal news, so this page is the place to track the status of The Kominsky Method, season three. Bookmark it, or subscribe for the latest updates. Remember, the television vulture is watching your shows. Are you?

A Netflix dramedy series, The Kominsky Method stars Michael Douglas and Alan Arkin with Nancy Travis, Sarah Baker, and Susan Sullivan. Actors recurring in season two include Jane Seymour, Jacqueline Bisset, and Paul Reiser. In the show, former star Sandy Kominsky (Douglas) is now a respected but frustrated acting coach. Impeccably dressed, Norman Newlander (Arkin) is his best friend and longtime agent. Sandy and Norman keep each other laughing as they navigate the ups and downs of getting older in Los Angeles, a city that worships youth and beauty.

Unless they decide to publicize viewership, it is difficult to predict whether Netflix will cancel or renew The Kominsky Method for season three. Generally speaking, Netflix TV shows which are going to be renewed are usually picked up within a month or so of the series or season premiere. Given the cast of this show, I think that it will be renewed. For now, I’ll keep my ears open and an eye out for news, and will update this page with breaking developments. Subscribe for free alerts on The Kominsky Method cancellation or renewal news.

7/3/20 update: The Kominsky Method has been renewed for a third and final season on Netflix.

What do you think? Are you glad The Kominsky Method TV show has been renewed for a third season? Are you sorry that will be the end of this Netflix series?

Well written, timely topics, exquisite acting, so… why will the third be the final season? Any chance the producers can be talked into selling it to a different outlet than Netflix? Please please don’t let it go away.

The Kominsky Method will end after 3 seasons.

Love this show and can’t wait for season three

Love, love, love this show! Best I have seen in a very long time.

Love this show! The writing and acting are superb❤️

Please, please, please do not cancel this show, it is so well written, tackles real issues and is well acted. Confirm series 3 soon pretty please with sprinkles on top

This is a wonderfully portrayed realistic story of two pals. Maybe you have to be an old guy with a pal to really enjoy it. Please do more. Please

After watching season 1 and 2 for at least 10 times there has to be season 3 as so many unanswered question ended in season 2. Chuck Lorre is a pure genius for his superb writing and the actors playing Sandy and Norman are perfect for this series. I cannot think of two actors better suited for their respective roles. Please please renew season 3.

Jim Parsons (not the actor)

This is one of my favorite shows of all time. The acting is wonderful and it’s both funny and engaging. I would be broken-hearted to see this cancelled. Please bring back a Season 3.