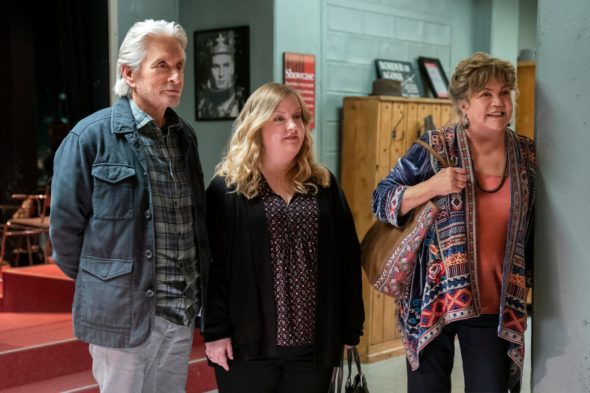 Sandy’s class will be dismissed in May. Netflix has announced that the third and final season of The Kominsky Method will debut on Friday, May 28th. Previous seasons of the single-camera have had eight episodes each while the final season will have just six half-hour installments.

Also missing for the final season will be Alan Arkin’s Norman Newlander character, the longtime friend and agent of actor and coach Sandy Kominsky (Michael Douglas). It was revealed last year that Arkin had only signed on for two seasons. Those who are returning include Kathleen Turner, Sarah Baker, Paul Reiser, Lisa Edelstein, Emily Osment, Graham Rogers, and Haley Joel Osment.

In season three, life will become more complicated for Sandy with the return of his ex-wife, Roz Volander (Turner). The pair’s famously volatile relationship is further inflamed when she comes to Los Angeles to spend time with their daughter Mindy (Baker) and her boyfriend Martin (Reiser). The final episodes will deal with money, death, love, murder, and dreams coming true — aka, the usual.

Debuting in 2018, The Kominsky Method was created by Chuck Lorre. Lorre, Al Higgins, and Douglas executive produce the series which is produced by Chuck Lorre Productions, Inc. in association with Warner Bros. Television.

What do you think? Are you looking forward to seeing the third and final season of The Kominsky Method series? Are you disappointed that this Netflix comedy won’t have a fourth year?

I will miss it! It’s been great!

Been waiting for the third season for so long an was really excited. And now Norman isn’gonna be in it?? He is the whole show for me! I love Alan Arkin and this character was so grumpy and funny. Not gonna watch it now.

The same genre. Nothing new nothing exciting boring as hell

Great – Thoroughly enjoyed the other two seasons and I’m looking forward to season three. Too bad that will be the last