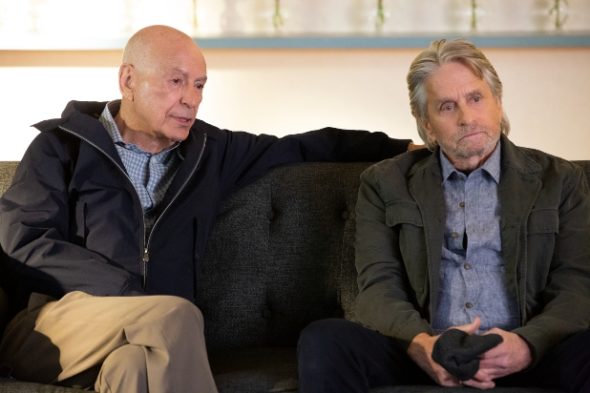 Sandy and Norman are getting together for one last act. Netflix has announced they’ve ordered a third season of The Kominsky Method for the 2020-21 season. Season three of the series will also be the final season.

The comedy TV show stars Michael Douglas as Sandy Kominsky, a respected acting coach, and Alan Arkin as his agent, Norman Newlander. Together, they keep each other laughing as they navigate the ups and downs of getting older in Los Angeles, a city that worships youth and beauty.

Normally, Netflix does not release ratings so it can be difficult to gauge a series’ success. However, it’s no surprise the streaming service has renewed The Kominsky Method. The show has already won two Golden Globes, including Best Television Series — Comedy or Musical, and was nominated for three Emmys.

The Kominsky Method has been renewed for a third and final season.

Creator Chuck Lorre said, "It's been an incredible experience to see the warm response from both audiences and critics. I'm excited to wrap up the story with this final chapter.”

What do you think? Do you watch The Kominsky Method? Are you looking forward to season three? Are you sorry that there won’t be a season four on Netflix?

Love the show. It has been a wonderful dance. It shouldn’t be the last season. Netflix owes us more

I love this show, one of the best in years! Season 2 was too short and I hope Season 3 will be longer, in fact, it can run forever!

I am so Happy that it is coming back for season 3, I hope that it gets more great reviews and you decide to continue it. I absolutely love it

So sorry to see that this will be the last season for The Kominsky Method. Does anyone know why they decided to end it?

This makes me very happy. I truly enjoy this show and hope that it will continue beyond season three.

I was hoping this would last forever. One of my absolute favorites. Arkin and Douglas outdo themselves in every episode. Fabulous show.