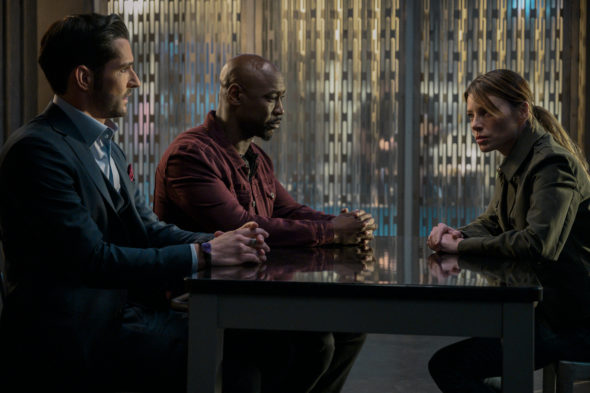 Is a devil’s work never done? Has the Lucifer TV show been cancelled or renewed for a sixth season on Netflix? The television vulture is watching all the latest cancellation and renewal news, so this page is the place to track the status of Lucifer, season six. Bookmark it, or subscribe for the latest updates. Remember, the television vulture is watching your shows. Are you?

There’s no need to wonder about the fate of the Lucifer TV series. The streaming service has already renewed the series for a sixth and final season. I’ll keep my ears open and an eye out for news, and will update this page with breaking developments. Subscribe for free alerts on Lucifer cancellation or renewal news.

What do you think? Are you glad that the Lucifer TV show has been renewed for a sixth and final season? How would you feel if Netflix had cancelled this TV series, instead?

So, the extremely popular series Lucifer, is now being terminated by Netflix after season 6???!!!?? Why???? Why would they make such a foolish decision? I don’t know why I’m so surprised, Netflix has done this to many awesome series, and it boggles the mind why they would do it again to a series that could definitely have a couple more seasons and is one of the best fantastical series on tv!!! There are so few really well written, well cast and acted series today, it boggles the mind as to why they would cut Lucifer off at the knees!!???! Shame… Read more »

Here we are again – renewed for sixth and final season. Since last year it said FIFTH and final season renewal, what are we to believe? At any rate, Netflix is my least favorite television app, but I get it for watching The Travelers over and over again, Lucifer, and one or two other shows I enjoy (the Kominsky Method and The Witcher). But once they are all finished, I am going to drop Netflix. It truly has gone downhill the past couple of years.

Couldn’t bear to not binge-watch Season 5, so stayed up all night and did so. Can’t wait for the next part of Season 5. Can’t bear to think that Season 6 will end the series. Must that happen?

So … happy for season six . All the actors on the show so talented . Now the show runners can have an opportunity to end the show as they always wanted too . Looking forward to second part if season five .
Casting for God … spot on . Keep up the good work !!!

Man i sure wish it wouldn’t end at season 6. It’s such a good job. I hole family watches it. I just hate to see it end.

So happy to learn Lucifer will have 6th season!!!