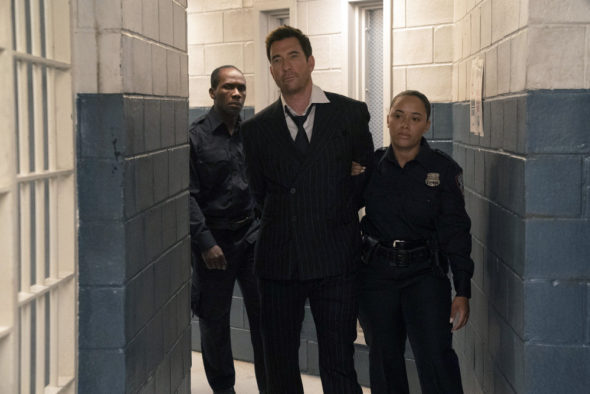 Law & Order: Organized Crime is returning to NBC for its second season in September, and viewers will see more of the first season’s villain, Richard Wheatley, played by Dylan McDermott. The actor has committed to return for eight episodes of season two pitted against Christopher Meloni’s Stabler again, per Deadline.

The actor had initially only signed on to appear in the first season of the drama as a series regular, but viewers gave his character so much attention – NBC worked to bring him back for the second season of Law & Order: Organized Crime.

What do you think? Are you excited to see what McDermott’s character does next on Law & Order: Organized Crime?

I prefer to watch a series rather than a serial. It’s fictitious so the bad guy should get it in the neck at the end of each episode. How long do I have to wait before the bad guy is brought to justice.

Si Happy to See him AgainAnywhere

Love to see Christopher & Dylan at each other. Dylan plays a guy with no conscience at all. Christopher plays such a tortured guy. Would be nice to see that Christopher take him out.

No I did not like his character & was hoping we were done with him.

Season two already and not a word about when it will be shown in UK. Don’t tell us any more about it until it has a view date.

Very happy Dylan is returning. HE Gives it a movie feel to it. Love.

I loved Dylan as a villain. Looking forward to season 2.

I’ll look forward to seeing him on the show…he and Christopher Meloni will play well against each other..!

I enjoyed Season 1. I expect, as with most shows, it will improve with Season 2.

The typical TV/movie mobster types always seem to hold on to most of their power while incarcerated, so no doubt we will see Richard giving orders from his prison cell via the usual “burner phone” that the guards are probably paid well not to notice.

Meanwhile, what’s left of his mob makes Stabler’s life miserable on the outside. The reported “8 episodes” probably means this will be the story right up until the winter break. And then when the show comes back in February (or whenever) there will be a new mob to go after.