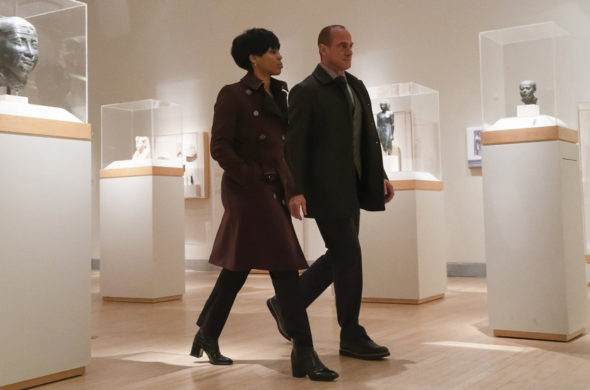 An NBC police procedural series, Law & Order: Organized Crime is a spin-off of the long-running Law & Order: Special Victims Unit TV show and stars Christopher Meloni, Dylan McDermott, Tamara Taylor, Danielle Moné Truitt, and Ainsley Seiger. Nicky Torchia, Michael Rivera, and Ibrahim Renno recur. For 12 seasons of SVU, NYPD Detective Elliot Stabler (Meloni) worked for Manhattan’s 16th Precinct and was partnered with Detective Olivia Benson (Mariska Hargitay). In the spin-off, Stabler returns to the NYPD to battle organized crime following the loss of his wife, Kathy, in a car bomb that was meant for him. However, the city and police department have changed dramatically in the decade he’s been away and he must adapt to a criminal justice system in the midst of its own moment of reckoning. Stabler aims to find absolution and rebuild his life while leading a new elite task force that is taking apart the city’s most powerful criminal syndicates one by one.

*5/14/21 update: Law & Order: Organized Crime has been renewed for a second season on NBC.

So sick of Wheatley…time to end him and focus on another villain.

Sorry. Still too many mental issues and the focus of one bad guy rather than interesting cases each week. Needs a LOT of work. I am not impressed at this point.

Really like the show. So far so good. Like Christopher Meloni glad he’s back and has a show of his own. Looking forward to how the show goes after he catches his wife’s killer

Its an awesome addition especially keeping him as Elliot Stabler..my problem is the cast….they are not as powerful as svu cast members in fact am still upset over Tamara Tunie Bd Wong Diane Neal Stephanie March never brought back to svu…no offense but Rollins gets on my nerves Scaravinos charm is wearing off as is the ADa….Isabelle Gillis was terrific …It would be great to have all the original talent back that made svu what it is. Organized crime….I see viewer issues without a great supporting cast it won’t make it past 2 seasons.., Melani or not McDermott is the… Read more »

Loved OC and it better NOT get cancelled. Stabler is awesome. I’d like to see more of his team and of course, we all want to know what’ll happen with him and Olivia. lol

I Love Christopher Melanie! He was great in SVU. I also saw him in Happy!
He’s a great actor. I wish there were more Happy! episodes. I really like Organized Crime and I hope its renewed again and again.
Thank you.

I hope Law and Order SVU deserves to renewed another season. 🙂

cancelled awful NCIS series love it enjoy it. So irritating story let it die tire of this topic too.

I’m not sure how I feel about the Stabler return… I watched both.. Not really surprised about Kathy’s demise.. I’ll keep my predictions to myself about the way things will play out..

Seem to be off to a slow start

Very good show as is all of DICK WOLFS’ tv series are. Chris is the right choice for this character. NBC did a nice crossover event with SVU/ORGANIZED CRIME. I give it a thumbs up and expect it to be in next seasons lineup. I’ll be watching. Welcome back Chris!