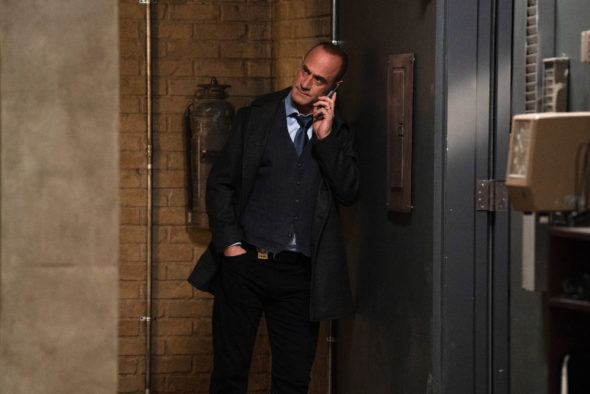 Law & Order: Organized Crime kicked off in a big way on NBC earlier this week, and it has now been reported that three more actors have joined the cast. Nicky Torchia, Michael Rivera, and Ibrahim Renno are joining Christopher Meloni, Dylan McDermott, Tamara Taylor, and Danielle Moné Truitt in the police drama.

The NBC drama follows the return of Elliot Stabler (Meloni, above) to the NYPD after a huge personal loss. Per Deadline, the following was revealed about the roles of the three additions to Law & Order: Organized Crime:

Law & Order: Organized Crime will continue to air on Thursday nights on NBC.

What do you think? Are you a fan of Law & Order: Organized Crime? Do you plan to continue watching the series?

Sorry to say that I was less than impressed by episode one of OC. First and foremost, I am NOT happy with Dylan McDermott in that sleezy role of a mob boss. I am a big fan of him, and that is not the way I want to see him. If his character is going to be Stabler’s focus going forward, then I won’t continue with the show. Also, very surprised that Dick Wolf couldn’t get a better crop of actors for the cast. Other than Christopher and Dylan, who are the rest of those actors? Not up to the… Read more »

Hmmm… I’m a big fan of the character Stabler but this doesn’t feel like the other Law & Order franchises. I would be extremely happy if Law & Order Organized Crime would adopt the feel and style of L&O and SVU then I would believe they exist in the same universe. As of now, OC seems odd to me. I would feel happier if the shows openings credits would follow the L&O tradition. I will give it time to get it’s own legs and groove! 🙂

Love the show, I will be watching and wish more of the SUV cast would join stabler.

I liked it will be watching

YES!! I will give this show a go! I can overlook any political connotations and enjoy the story line.

Wasn’t impressed with the show or any of those actors….No Thanks

I really wish that tv would quit with the political opinions. That is the quickest way for me to turn off the station. I stream a lot to NOT support the networks doing this. I see ratings going down for many shows and I think this is why. I love svu but in the first 10 minutes I was insulted. No thanks

I won’t be watching it at all. Meloni’s political statements killed it. Considering how few shows there will be, it looks like NBC is just trying to figure out a way to get Meloni back into SVU full time. It would take Hargitay taking a serious pay cut(at least $100,000 per episode) and Kelli Giddish being forced out the door.

Yes, Yes, Yes. Cannot think of many episodes I might have missed while working but now reruns are a great way to follow every Law and Order episode, some of which I have seen multiple times as they are that good. The guest stars are great and the regular series actors are tremendous and talented.

It was okay, but L&O: SVU didn’t get its legs until the 2nd or 3rd season, so I’m staying with it.