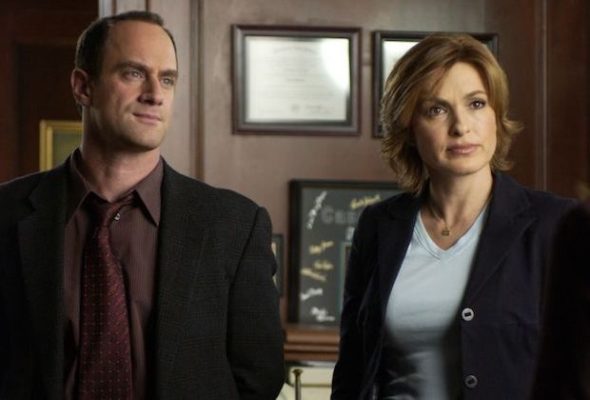 As reported earlier, Christopher Meloni will be reprising his SVU role as Elliot Stabler for a new spin-off series centered on the NYPD’s organized crime unit. Meloni played Stabler on the first 12 seasons of Law & Order: SVU.

In the interview, Leight revealed they were initially going to bring back Elliot’s wife, Kathy Stabler (Isabel Gillies), for the season 21 finale of Law & Order: SVU. However, production was cut short because of the ongoing coronavirus pandemic so plans had to be adjusted. Now, Elliot’s re-introduction will be moved to season 22:

We were just going to lay some groundwork down in anticipation of Elliot’s return of course in his own series. We had the sense that the first episode of next year for SVU was going to bring Elliot back, so we were going to foreshadow that and explain a little more what happened to Simon.”

NBChas not yet announced a premiere date for the spin-off series. Co-star Mariska Hargitay posted about Meloni’s return last month:

What do you think? Are you a fan of Law & Order: SVU? Will you watch the Christopher Meloni spin-off?

Another winner. I’ll be supporting this show also. Day one viewer.

Love Stabler. Will watch it!

of course i ll watch the spin off.love law and order in all its forms.

No. I won’t watch his spinoff

Absolutely, have been a chris fan forever.
Can’t wait for the new show

Enjoyed SVU for years until it turned political. Stopped watching at that point I watch the news for politics. And now I seldom choose to watch the news. I’ll give the spin off a chance. Look forward to it and hopefully it will be produced for entertainment not to make apolital statement

I agree, plus it turned in to the Olivia/Noah show, that was also a turn off for me

The news is wonderful! Elliot Stabler is coming to the Law & Order SVU group. I look forward to it.