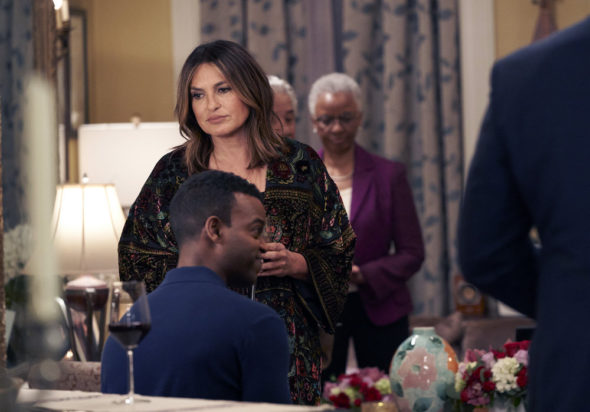 Law & Order: Special Victims Unit is one of the many television shows to see their season cut short due to the production shutdown caused by the coronavirus. There were big plans in motion for the season 21 finale, and it does have a connection to the return of Elliot Stabler to the network.

Warren Leight said the following about the return of two characters to Law & Order: SVU, per TV Line:

“We were hoping to bring back [Stabler]’s wife and troubled son — in part to tee up his return.”

It wasn’t revealed which of his two sons would return. NBC has already order a 13 episode season one for the yet to be titled Law & Order spin-off. Chris Meloni will reprise his role for the series.

What do you think? Did you want to see this season finale for Law & Order: SVU? Do you plan to watch the spin-off?

I have watched Law & Order SVU from the very first episode. This summer I went back & started watching all of them from the beginning…I have done that every 5 years or so. I don’t want to sound obsessed or crazy. I just think that you have an excellent group of actors/actresses for the show. So I would really love to see last seasons finally. I look forward to more seasons of SVU, as well as the upcoming new show!

I love Law & Order. It would be nice to see Olivia and Stabler, back on the case—

I love Law & Order. It would be nice to see Olivia & Stabler, back on the case…

I have watched L&O SVU from the beginning and would love to see a return of Chris Meloni.

My husband and I have watched Law and Order SUV for the last 21 years love And Would to see Chris Meloni come back on another follow up program. Like the FBI has on CBS.

I really want to see the series finale of SVU I love the show have watched every season so far! Will there eventually be one?

I absolutely want to see the Season Finale and want to see how Elliot is reintroduced. Maybe it’s a 2 Hr special crossover!!! I’m so excited Elliot is coming back. I love that Olivia and Elliot will maybe work together depending their positions! Hopefully is “hot head” demeanor has improved to only protect his staff if he has any. This sounds like a great night of TV! Woohooo

Yes I want to see is the season finale. I will also watch the spinoffs coming this fall.

Yes I want to see the Season Finale. They could make it the 22nd Season Opener.
Of course I’d watch the Spinoff

Everything about SVU is wonderful, have never missed an episode since it first aired. Would LovE is Stabler came back.

I love law and Order I watch all the episodes everyday I love to see Stabler He is a great actor He makes you feel the part He is playing please bring Him BACK thank you. Eleanor Langello