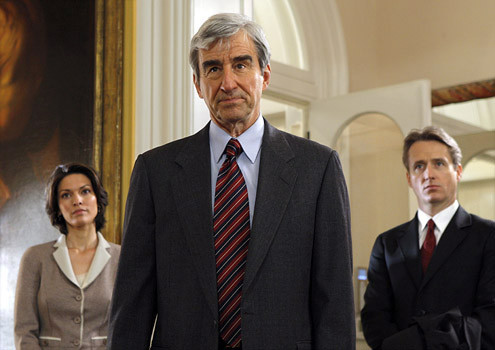 Sam Waterston isn’t finished with Law & Order just yet. TVInsider reports Waterston will return to the NBC franchise as a guest star on Law & Order: SVU.

The Emmy-winning actor played Jack McCoy on the original Law & Order for 16 seasons and has reprised the character on SVU and Law & Order: Trial by Jury. Law & Order: SVU is currently in its 19th seasons and stars Mariska Hargitay, Ice-T, Kelli Giddish, Peter Scanavino, and Raúl Esparza.

Waterston’s appearance on Law & Order: SVU will air on NBC on February 7th at 9 p.m ET/PT.

Read a brief synopsis of the episode, titled “The Undiscovered Country,” below:

What do you think? Are you a fan of the Law & Order franchise? Are you excited to see the return of Jack McCoy?

I loved Sam Waterston returning to SVU, but I was EXTREMELY HEARTBROKEN when Raul Esparza was leaving the show!! The entire content of this episode had me sobbing in tears!!! I have been watching since the very first episode way back in September of 1999!!! And the re-runs to boot!!! Thanks so very much for all these years of all the L&O Series, but SVU & Criminal Intent especially!!!

I thought Jack McCoy was no longer DA. Is he back? Will we see more of him?

Yes.He has been a cornerstone of the Law& Order franchise. However I am not the biggest fan of SVU!

I kind of left SVU for a couple of years, but I started having a “brief look” at it this fall, and I got hooked : it is getting more and more interesting with each episode, totally main stream. I’m so glad this team has kept at it – it flows like a well oiled machine while keeping on top of what is really current. The acting and script is still of the utmost quality. Mr Waterson also counts many years where he’s proven to us his great value as a stellar actor with charisma. I am looking forward to… Read more »