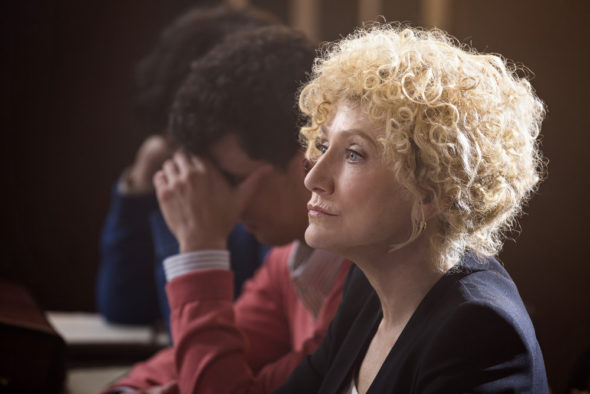 Season one of Law & Order True Crime airs its final episode on November 14th at 10 p.m. ET/PT, but will there be a second season? NBC has yet to renew the crime drama and ratings haven’t exactly been stellar for the show’s first season.

Watch a preview and read more details about the season finale below:

THE OUTCOME OF A SECOND TRIAL SEALS THE FATE OF THE MENENDEZ BROTHERS – After the first trial ends with a hung jury and the District Attorney refuses to offer the defense a deal, a second trial gets underway with Barry Levin (Harry Hamlin) joining the defense team. Political collusion between the District Attorney’s office and Judge Weisberg (Anthony Edwards) reaches an apex as Garcetti (Mark Moses) fights to repair the office’s reputation following a string of high-visibility losses. When Judge Weisberg disallows Lyle and Erik’s family members to testify, it’s up to Erik to once again recount the stories of abuse before the jury determines a verdict. As the trial comes to a close, Leslie learns revealing information about Jose and Kitty’s childhoods.”

What do you think? Are you watching Law & Order True Crime? Would you watch a second season?

SVU has been so boring lately , “true crime” has been a true godsend

The show has been very good! I would definitely watch another season

I liked this show. My whole family watched. My kids are older – young adults – and we all watched. Can’t wait for season 2!!

I really like the show but the time it comes on makes me have to PVR it. I am a mom of three and ten is too late for me to start watching TV to go to work the next day. I do enjoy the series and was hoping it would continue. I also enjoy SUV and PVR those episodes too as it is on a lot and I am not always around to watch on live TV.

I started watching it, but it has become so boring, I have quit. Everyone knows they killed their parents. Enough already.

For all the people that do not like the show…3 Simple Words…
DO NOT WATCH !!!!

And the ratings show many people are not watching. Perhaps because they don’t like it. For me, it’s take it or leave it.

We did not like this show at all. The subject matter just did not interest us.

we really liked this show. Surely kept our interest. Very interesting, and kept us in suspense. Hope you air another series. We would definitely