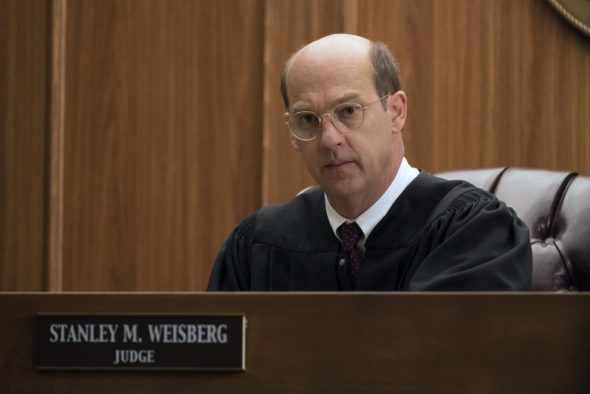 TV show description:
The Law & Order True Crime TV series is the latest spin-off from the prolific Dick Wolf. The franchise began with the original Law & Order, which aired on NBC between 1990 and 2010. Where the flagship series and its spin-offs have often touted the “ripped from the headlines” nature of their storylines, Law & Order True Crime lives up to that claim and its title. The anthology series chronicles a real-life crime in each season.

The first edition of this series is Law & Order True Crime: The Menendez Murders. On August 20, 1989, entertainment executive José Menendez (Gómez) and his wife, Mary a.k.a. “Kitty” (Davidovich) are shot to death with a Mossberg 12-gauge shotgun, in their Beverly Hills home.

Defense attorney Leslie Abramson (Falco), takes an interest in the young men and decides to take their case. She works alongside Jill Lansing (Nicholson) on their defense.

The Menendez brother’s first trial aired on national TV and created a media circus. Law & Order True Crime: The Menendez Murders recounts the daily courtroom battles as well as how things played out, off camera.

Series Finale:
Episode #8
After the first trial ends with a hung jury and the District Attorney refuses to offer the defense a deal, a second trial gets underway with Barry Levin (Harry Hamlin) joining the defense team. Political collusion between the District Attorney’s office and Judge Weisberg (Anthony Edwards) reaches an apex as Garcetti (Mark Moses) fights to repair the office’s reputation following a string of high-visibility losses. When Judge Weisberg disallows Lyle and Erik’s family members to testify, it’s up to Erik to once again recount the stories of abuse before the jury determines a verdict. As the trial comes to a close, Leslie learns revealing information about Jose and Kitty’s childhoods.
First aired: November 14, 2017.

What do you think? Do you like the Law & Order True Crime TV series? Should this TV show have been cancelled or renewed for a second season on NBC?

LOVE the show! Every season could have been a different story line

I loved this first story. With the name Law & Order True Crime, I was thinking this would go by a “true crime”, with each Season or Episode. I took the 6 or 8 episodes with the first True Crime being the Menandez Murders. Then once the true story was told in however many episodes it took, there would be a new “True Crime” to show all the way through. What I’m trying to say is the true crimes would be different, with an opening on a true case, and episodes following until the ending of that true case. So… Read more »

I can’t believe they’re wasting a whole season on this one story… and what a big waste of talent using Anthony Edwards… he deserves better!