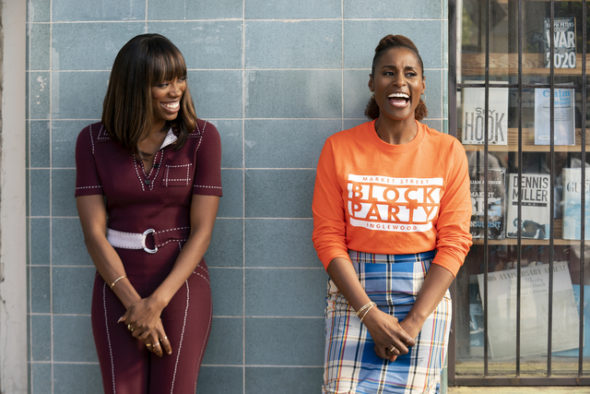 The ups and downs of Issa, Molly, Lawrence, and Tiffany are far from over. HBO has renewed the Insecure TV series for a fifth season.

An HBO single-camera comedy series, Insecure stars Issa Rae, Yvonne Orji, Jay Ellis, Natasha Rothwell, Amanda Seales, Kendrick Sampson and Alexander Hodge. The TV show centers on friends Issa (Rae), Molly (Orji), Lawrence (Ellis), and Tiffany (Seales) as they deal with their own real-life flaws. They attempt to navigate different worlds and cope with an endless series of uncomfortable, everyday experiences. In season four, Issa pursues a passion project she actually cares about and Molly navigates a real relationship for the first time. Meanwhile, their friend Lawrence figures out what leveling-up means for him, and Tiffany’s baby changes the dynamic of the friend group.

So far, season four of Insecure is averaging a .21 rating in the 18-49 demo and 487,00 viewers. You can read more about the series’ season five renewal from HBObelow:

“We’re thrilled that Issa, Prentice, and the whole Insecure team will be getting back together for a fifth season,” said Gravitt. “As we laugh and cringe with recognition, their stories make us all feel a little less alone in the world.”

INSECURE’s ten-episode fourth season debuted April 12 on HBO. The series stars Emmy®, Golden Globe and NAACP nominee Issa Rae (“The Photograph”) who heads the ensemble cast, and continues to follow our favorite characters as they evaluate their relationships, both new and old, in an effort to figure out who and what comes with them in this next phase of their lives.

What do you think? Do you like the Insecure TV show? Are you glad that this comedy series has been renewed for a fifth season?

3 Comments
Inline Feedbacks
View all comments
What The Falcon

I’m ALL in for Insecure. The Cast is educated and full of fun. There a message in every episode. Stay WOKE

1
0
Reply
What The Falcon
Reply to  Royalty

Lol idk about the woke stuff but.. love the show. Very funny and at times moving