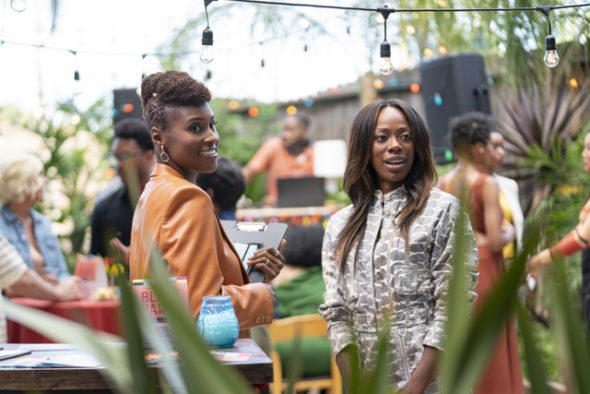 Can the friends handle the changes that are coming their way? Has the Insecure TV show been cancelled or renewed for a fifth season on HBO? The television vulture is watching all the latest cancellation and renewal news, so this page is the place to track the status of Insecure, season five. Bookmark it, or subscribe for the latest updates. Remember, the television vulture is watching your shows. Are you?

Airing on the HBO cable channel, Insecure stars Issa Rae, Yvonne Orji, Jay Ellis, Natasha Rothwell, Amanda Seales, Kendrick Sampson, and Alexander Hodge. The TV show centers on friends Issa (Rae), Molly (Orji), Lawrence (Ellis), and Tiffany (Seales) as they deal with their own real-life flaws. They attempt to navigate different worlds and cope with an endless series of uncomfortable, everyday experiences. In season four, Issa pursues a passion project she actually cares about and Molly navigates a real relationship for the first time. Meanwhile, their friend Lawrence figures out what leveling-up means for him, and Tiffany’s baby changes the dynamic of the friend group.

The fourth season of Insecure averaged a 0.18 rating in the 18-49 demographic and 421,000 viewers. Compared to season three, that’s down by 69% in the demo and down by 63% in viewership. Find out how Insecure stacks up against other HBO TV shows.

Will HBO cancel or renew Insecure for season five? The series has done really well for HBO in the ratings but the previous season ended way back in September 2018. Have viewers forgotten about it? I suspect that this show doesn’t cost much to produce and, as long as Rae wants to continue making it, HBO will renew it. I’ll update this page with breaking developments. Subscribe for free alerts on Insecure cancellation or renewal news.

1/13/21 update: Insecure has been renewed for a fifth and final season.

What do you think? Are you glad that the Insecure TV show was renewed for a fifth and final season? How would you feel if HBO had cancelled this TV series, instead?